A young alien, Stu, is in a spaceship taking an examination in abduction. He must snatch a sleeping human farmer, named Ernie, under the watchful eye of his instructor, Mr. B. However, there is an array of thousands of unlabeled toggle switches he must manipulate to get the sleeping Ernie into the ship's tractor beam, and he is having trouble. He mistakenly propels Ernie into walls and occasionally the ceiling (never waking up from his slumber through it all). After repeated failures to successfully lift Ernie into the ship (he almost succeeds, but forgets to close the door on the bottom of the ship before turning off the tractor beam), Mr. B takes over, returns Ernie back to his room, and cleans up the mess that Stu had made.

Ashamed over his failure, Stu starts whimpering, trying to hold his tears back from Mr. B, who generously allows Stu to launch the space ship back home. Full of glee, Stu takes hold of the joystick and starts to lift the ship into the air, but once again, he fails, and the space ship plummets to the Earth, crushing Ernie's house and leaving nothing but a crater with a tall pillar of dirt in the center, atop which Ernie is still sleeping soundly in his bed. The ship quickly lifts off again.

During the end credits there is the sound of an alarm clock, Ernie waking up, then a Wilhelm scream as Ernie falls into the crater all around him, and finally, a thud.

Production on the film began in mid-2005 and was completed in the summer of 2006.[1] It debuted with Pixar's theatrical release of Ratatouille (June 29, 2007). However, the short received a sneak peek at the 42nd Chicago International Film Festival.

There were no large technological advances used in Lifted, only the use of a new program called Jiggle. This program gives the animators a way to resonate, or jiggle, certain parts of a body. The animator can control how far out to resonate, such as only within a limb, or to stay away from specific parts of the body such as the face.[1] 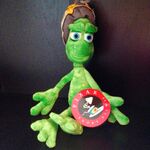 A plush of Stu