The Light Fighter is also known as The 3 Man Light Jet it is a small aircraft capable of high speed flight and can seat three people. Those depicted in TRON: Legacy have all been combat ready.

The larger Light Jets are permanent constructs, able to house a crew of three within a forward cockpit. The central couch can rotate and slide to the rear of the craft, locking into a tail-mounted gunnery cupola with tail guns capable of firing a steady stream of automatic fire through a narrow arc. The forward-mounted guns are fixed and simply fire in the direction the craft is facing. Additionally, the craft mounts a three-barreled rapid fire gun on its chin, directly in front of the pilot's station.

Like Light Cycles, Light Fighter models have the ability to generate a pair of light ribbons to further impede pursuers. 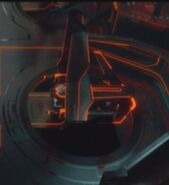