Still standing
The Lightfoot House is the home of the Lightfoot family in the 2020 Disney•Pixar animated feature film, Onward. It is located in the fantasy city of New Mushroomton in the suburban area section where families live in their houses.

The Lightfoot House is located in New Mushroomton in the suburban area section where families live in their houses. There are red mushroom roofs on the house, alongside a garage, a mailbox, a lawn, a backyard with a pool, an attic, a basketball hoop, a chimney, and some plants.

Within the house lives the Lightfoot family. It was home to the late Wilden Lightfoot before his death, followed by his wife, two sons and their pet dragon Blazey.

The living room is where the family plays board games, watch TV, does exercise, and other stuff.

This is where the family cooks food, eats food, prepares food, and other stuff in the kitchen.

This is where Ian Lightfoot sleeps, does hobbies, listens to his dad's voice in the record tape in the radio, and other stuff. This is also where he performed a magical spell that almost brought their deceased father back to life but only half of him.

This is where Barley Lightfoot takes out the trash and does other stuff. This is also where Colt Bronco caught him for trying to unsuccessfully preserve the old water fountain structure building from demolition. 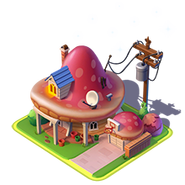