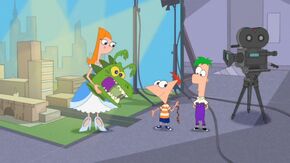 Phineas and Ferb direct a film adaption of Candace's favorite play, but they transform this beautiful play into a full-out monster movie. Meanwhile, Perry the Platypus tries to find out why Dr. Heinz Doofenshmirtz is being so quiet. Guest stars a live-action Candace, played by her voice actress, Ashley Tisdale.

Candace is in her bedroom quoting lines from her favorite play, The Princess Sensibilities in front of a mirror when she hears a roar and goes to the backyard to see/bust whatever her brothers are doing. Phineas and Ferb are making a monster movie in the backyard, complete with a tiny city through which a miniature monster rampages. Candace bursts in to scream at them to keep it down and stomps on the set, destroying it, but they don't seem at all dismayed. When she says their movies are lame they tell her that their website received 176 million hits last week. Linda comes home, presumably from the store (as she has a bag of groceries in her arms) and mentions to Candace that somebody was filming a movie version of the play The Princess Sensibilities. She instantly becomes determined to get the part of the princess in the movie, as she apparently knows every line from heart (having practiced for her drama club all summer. She runs off, leaving Phineas and Ferb alone in the backyard. Phineas wonders where Perry is.

In the make-up chair, Candace is introduced to some of her instructors, such as her swimming instructor, her clothes designer, and even her bagel. She also gets introduced to her personal trainers, Olga and Chicago Joe (who were lice at Gunther's Goat Cheeses in "Raging Bully"). The producer then introduces her the new directors and Candace is outraged when she finds out they're her own brothers. Phineas explains how Isabella helped them out, being their agent and all. Candace asks the producer if they were "a little young to be big budget movie directors", but even the producer knew about Phineas and Ferb on their last movie getting 176 million hits, saying that "they could be in diapers for all he cares". When Candace gets into her costume, it turns out she has to wear a monster mask during the filming. She says that she doesn't remember any monsters being in "The Princess Sensibilities." Phineas tells her that they finished re-writing the copy of the script into "The Curse of the Princess Monster," with Candace still in the lead role. Candace complains that no one would see her face. The producer then explains that at end of the movie, the curse is lifted and this could make her a star, leaving Candace daydreaming about being a star. She tries to run out onto the stage to begin filming, but every time her monster head is knocked off by the door.

Agent P breaks into the Doofenshmirtz Evil Incorporated headquarters by completely smashing the front door, but no evil is going on, and Dr. Doofenshmirtz forces Perry to pay for the broken door. Perry hands him some money, but he demands more, saying that "it's not just drywall, it's solid oak." He lectures Perry on breaking down people's doors, making Agent P feel guilty. It turns out that the Doctor has given up evil to pursue cheese making. He is making stinky Limburger, which apparently is an old Doofensmirtz family recipe made by suspending a milk cow over a boiling cauldron when milking. The cheese must age for 58 1/2 years to be completely finished, but Doofenshmirtz says that nobody has that kind of time and has therefore invented the Age-Accelerator-inator to speed up the process.

Meanwhile, Phineas and Ferb are doing some chase scenes; they strap the camera onto a hungry chimpanzee or a hungry Ferb and make Candace hold food. Several mistakes and mishaps happen on set, such as the camera's lens cap being left on, plumbing supplies being dumped on Candace, etc. Even though Candace's performance is horrible (due to her being pelted by airplanes, missiles, and spiders, among other things), Ferb cleans up Candace's performance in the editing room, replacing her with a beautiful realistic-looking woman (actually Candace's own voice actor, Ashley Tisdale). "That is what they call movie magic," said Phineas. Candace is very satisfied with how it looks.


(picture of Dr. Doofenshmirtz pops up on screen)


He's been very quiet lately, a little too quiet! I want you to find out what's not going on and, uh.. put a... stop...to it. I suppose.
Isabella: Look. My client gets 3 percent of the gross and a piece of the back end, or he walks. Yeah, that's right. You mess with the bull, you get the horns, buddy!


Gets another call and transfers


Sid, baby! You got that third act in line yet?
Phineas: Okay Candace, this is a very important scene, it is nothing less than the emotional backbone of the whole film. Oh, and the villagers are coming at you with everything they've got.
Phineas: The space armada from the planet Plumbing Supplies!
Candace: (wearing a tropical banana hat) Wow! Am I doing some tropical dance number?


Phineas: We're trying to get some good camera angles for the chase scene, so we put the camera on a starving monkey.
(the monkey screeches and chases Candace, Candace is all bruised)
Phineas: Okay, that didn't work out. This time we will have the camera on Ferb. (shows Ferb with a camera strapped to his head) Take this sub sandwich. But be careful, Ferb hasn't eaten lunch yet.


(Ferb screeches and chases Candace, Candace is all bruised)
Phineas: All right, Candace. This is your beauty shot. The curse has been lifted, and you are no longer a monster. This scene is all about what the heart wants, but the mind can't have.

Retrieved from "https://disney.fandom.com/wiki/Lights,_Candace,_Action!?oldid=282209"
Community content is available under CC-BY-SA unless otherwise noted.