The lightsaber is a fictional weapon in the Star Wars universe, a "laser sword." It consists of a polished metal hilt which projects a blade of plasma about 1.33 meters long. The Lightsaber is the signature weapon of the Jedi order and their Sith counterparts, both of whom can use them for close combat, or to deflect blaster bolts. Its distinct appearance was created using rotoscoping for the original Star Wars films, and digitally for the prequel trilogy. The Lightsaber first appeared in the original Star Wars film and every Star Wars movie to date (except The Star Wars Holiday Special) has featured at least one Lightsaber duel. In 2008, a survey of approximately 2,000 film fans found it to be the most popular weapon in film history.

The Lightsaber's blade cuts through most substances without resistance. It leaves cauterized wounds in flesh, but can be deflected by another Lightsaber's blade, or by energy shields. Some exotic saber-proof materials have been introduced in the Expanded Universe. An active Lightsaber gives off a distinctive hum, which rises in pitch and volume as the blade is moved rapidly through the air. Bringing the blade into contact with an object or another Lightsaber's blade produces a loud crackle. The Lightsaber is designed as much for elegance in combat as for ceremony, the lightsaber was a distinctive weapon, the very image of which was inextricably bound with the mythos of the Jedi Order and their polar opposites, the Sith. The lightsaber also became synonymous with the Jedi Order's values to uphold peace and justice throughout the galaxy. This perception endured, despite the many conflicts with lightsaber-wielding Sith and Dark Jedi.

The weapon consisted of a blade of pure plasma emitted from the hilt and suspended in a force containment field. The field contained the immense heat of the plasma, protecting the wielder, and allowed the blade to keep its shape. The hilt was almost always self-fabricated by the wielder to match his or her specific needs, preferences and style. Due to the weightlessness of plasma and the strong gyroscopic effect generated by it, lightsabers required a great deal of strength and dexterity to wield, and it was extremely difficult—and dangerous—for the untrained to attempt using. However, in the hands of an expert of the Force, the lightsaber was a weapon to be greatly respected and feared. To wield a lightsaber was to demonstrate incredible skill and confidence, as well as masterful dexterity and attunement to the Force. 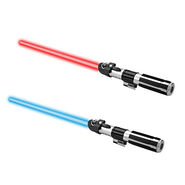 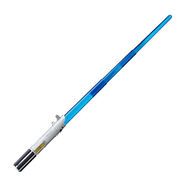 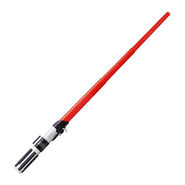 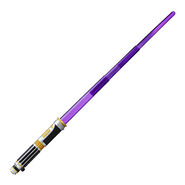 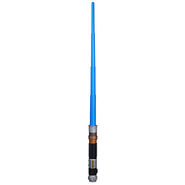 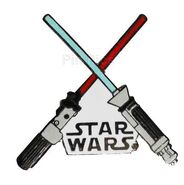 Retrieved from "https://disney.fandom.com/wiki/Lightsaber?oldid=1016932"
Community content is available under CC-BY-SA unless otherwise noted.