Great-Grandma Lilli
Granny May
Mrs. Lilli (mother)
Lilli is one of the main characters in Disney's 1985-87 television series Dumbo's Circus.

The only female character before Matilda Dinkum appeared, Lilli is a beautiful cat who serves as a tightrope walker in the circus. She sometimes wears glasses because of her bad eyesight - mostly to see things that are very close like books, signs, and to play checkers. She likes pretty things.

Lilli comes from a long line of tightrope walkers, and became the next to join Dumbo's Circus following Fair Dinkum, with her mom, Mrs. Lilli's, blessing. 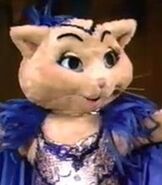