Lillian "Lilly" Truscott is one of the main characters in the Disney Channel series Hannah Montana. She is Miley Stewart's best friend and is the first person Miley tells about her double-life as Hannah Montana. Lola Lufnagle (originally "Lola LaFonda") is the alter ego of Lilly Truscott which she uses as a disguise when attending celebrity events where Miley is dressed as Hannah Montana.

Lilly was born on May 22, 1992, grew up in California and was childhood friends with Oliver Oken. She met Oliver in kindergarten and has been best friends with him ever since. She lives with her mother Heather Truscott (Heather Locklear) in Malibu. Heather appears in one episode, "Lilly's Mom Has Got It Goin' On," where she briefly dates Miley's father, Robby. Lilly's parents are divorced, and her father is an accountant. It is unknown if Lilly has any siblings. In "Miley Get Your Gum," Lilly refers to her brother's pet hamster. Later, in "Would I Lie to You, Lilly?," Lilly says "Sometimes I wish I had a brother, when I come over her, All better!"

Lilly and Miley have been best friends since about the 5th grade. She discovers Miley's secret in the pilot episode, "Lilly, Do You Want to Know a Secret?" when she sneaks into Hannah's dressing room after a concert and she sees the lucky bracelet that she had given Miley earlier in the episode.

Lilly is a huge fan of Hannah Montana even before she learns Miley's secret. She is extremely extroverted, excitable, clumsy, and impulsive. She is also very athletic and loves skateboarding, surfing, hockey, and cheerleading. She's considered the tomboy with a sweet, kind, and optimistic personality.

Lilly does cartwheels and backflips whenever she is excited about something such as getting asked to be someone's girlfriend in "My Best Friend's Boyfriend" and getting to go to Washington, D.C. in "Would I Lie To You, Lilly?".

Lilly and Miley have an especially close friendship. Although they often have fights and disagreements, they always manage to restore their friendship, making it all the stronger. Episodes which significantly deal with their relationship include "Lilly, Do You Want to Know a Secret?," "Would I Lie To You, Lilly?," "You're So Vain, You Probably Think This Zit is About You," and "Cuffs Will Keep Us Together."

Lilly is tone deaf, although when singing the Bone Song with Oliver and Miley she is a good sing, as heard in the episode "Song Sung Bad."[5] Miley (without telling Lilly) remixes her rendition of "One in a Million" to make her voice sound on key. Lilly, believing that she is a great singer, challenges classmate Amber Addison to a singing competition in front of their whole class. Lilly proudly declares to be singing "I Got Nerve" to which Robby replies, "You sure do."

Despite being somewhat of a tomboy, Lilly is also seen to be very concerned about her appearance. She refuses to enter a skating competition after her dog eats her contact lenses and doesn't want to be seen with her horn-rimmed glasses. (She is virtually blind without her glasses.) Sometimes she is more excited about wearing cute outfits than of solving problems. She is currently in the series dating Oliver. [6]

Lilly is seen in the first season as a tomboy and wears a lot of hats but not so much during Season 2 and 3. In Season 2, Lilly starts wearing wristbands in all colors and also in Season 3. In Season 3, Lilly is seen in a lot of episodes to be wearing a gold heart necklace. In the episode "More Than A Zombie To Me", while at the beach, it is shown that she is wearing a bikini under her cover-up.

In 'You Gotta Lose That Job', Lilly mentions that she would like to be a teacher and that she would be supportive, fun but no talking back (that is unacceptable, Lilly says). On "Sweet Home Hannah Montana" Lilly and Miley live together.

Lilly experiences a few short-lived dating relationships. She dates actor Jake Ryan (Cody Linley) at a 70s dance until Miley jealously breaks them up, and her schoolmate Lucas (Sterling Knight) until Miley discovers he is a cheater.

Miley also has a dream in which Lilly starts dating Jackson, and must learn to accept her friend for who she is. When Miley wakes up, she believes the dream was real and is pleasantly surprised when Lilly reacts with disgust.

In "You Are So Sue-able to Me," Lilly has a crush on her schoolmate Matt Marshall, but it is never revealed if they actually dated. After Matt asks Lilly to a dance, Miley tries to get Lilly to change her tomboy image so that Matt will find her more attractive. However, Matt gets turned off by Lilly's new look and stands her up. (Lilly and Matt reconcile at the end of the episode after Miley was found liable for Lilly's suffering in the Teen Court.) Lilly's celebrity crush is Orlando Bloom. Bloom is a recurring off-screen character in the show whom Lilly sometimes harasses at parties as Lola. She also has a crush on Justin Timberlake and supposedly spread a rumor that he's dating Lola.

In the unaired episode "No Sugar, Sugar," it is mentioned that Lilly had a crush on her French teacher during 7th grade. Lilly denied she had any feelings for the teacher but Miley proved this wrong by saying that he wore a Beret to school and said "Oui Oui" (Translation: Yes, Yes) (which sounded like "Wee, Wee") so much that people started calling her Tinkle Truscott.

Lilly starts her most significant relationship when she started dating Oliver Oken in season 3 of the series. Their friendship started in preschool when Lilly held his hand in order to share his crayons. Said Lilly, "He had the 64-Pack with the sharpener!" For years the two were best friends, but after a beach party, they decide to date each other (while Miley was away shooting her feature film Indiana Joannie) and Miley (along with the viewers) finds out in "What I Don't Like About You." However, after an argument over their favorite bands, (Radiohead and Coldplay) they broke up. Miley made a mini-Indiana Joannie movie and they made up and resumed dating. They attended prom together in Promma Mia. In "He Could Be the One", Lilly says she loves Oliver. Their names for each other are "Ollie-pop" and "Lilly-pop". In I Honestly Love You (No Not You) Lilly tells Miley that Oliver calls her "Lilly-pop" because she had a pimple.

In "I Honestly Love You (No, Not You)" a love triangle appears when Miley (while asleep in the hospital because of a broken ankle), overhears Oliver say "I love you" while talking to Miley. This leads to Miley believing that Oliver was in love with her while dating Lilly. Miley thinks that all she has to do is wait till Lilly moves onto someone else and that Oliver will change his mind. But when Lilly announces that she loves Oliver, Miley tells her the truth. Miley and Lilly then hatch a plan to get Oliver back only to find out that Oliver was in fact, practicing saying "I love you" so he could say it to Lilly. In the end of episode Lilly and Oliver both say that they love each other.

However, in "He Could Be the One Lilly," tells Oliver that while Lilly may be dating Oliver, Lola is dating Justin Timberlake according to an on-line rumor "she doesn't know who started."

In "B-B-B-Bad to the Chrome," Lilly and Oliver celebrated their 100th day relationship anniversary which Oliver forgets at first and Lilly was upset. They make-up again after Rico helped them get back together by writing a fake poem and send it to Lilly but signed as "Oliver Oken."

In order to help Miley keep her secret, Lilly attends all Hannah Montana events wearing a disguise and posing as Hannah's companion and assistant "Lola Luftnagle." Lilly first comes up with the name "Lola LaFonda" for her alter ego in the episode "Miley Get Your Gum", but she would later settle on Luftnagle in "It's My Party And I'll Lie If I Want To" and that name is used in all subsequent episodes. Lilly claims that Lola is the "daughter of oil baron Rudolph Luftnagle, sister of socialites Bunny and Kiki Luftnagle."

Lola wears a lot of jewelry like rings, necklaces, huge earrings, and bangles. Lola usually wears a short, brightly colored, wig but in Season 3 the wig is a little bit longer than the wigs used in Season 1 and 2. In most episodes Lola wears a differently colored wig, from white to red to purple (in one episode Traci Van Horne refers to Lola as a "bitter anime character").

Emily Osment has said that she has over 80 wigs for Lola and that her personal favorites are the purple and white wigs. Lola also dresses with loud colors and lots of jewelry. Lola is not dating Mike as said in "He Could Be the One". Instead, she is dating Justin Timberlake, according to an Internet rumor she has 'no idea' who started it. Emily Osment said in a backstage interview that she is more like Lola than Lilly and that she loves Lola's clothes and just wants to keep them. 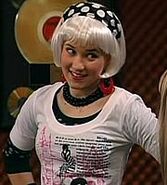