Destroyed in an explosion but was later rebuilt
Lilo's house, also known as the Pelekai residence, is a split-level home where Lilo, her sister Nani, Stitch, and later Jumba and Pleakley live in the Lilo & Stitch franchise.

The house is located in the middle of a heavily forested area just outside of Kokaua Town, Hawaii, alongside a hill and next to a cliff overlooking a stream down below. A very long dirt driveway separates it from the rest of society. Its seclusion makes it the perfect place for the alien residents to live in without the need to disguise themselves all the time, as well as to hide Jumba's massive spaceship nearby.

The house is on a large deck held up by stilts, with a side addition built on a higher level along the hillside and a small extension for the living room on the opposite side. The house is accessed from the ground in front by a stairway with an intermediate quarter landing. Underneath the house on the cliffside is an open-air carport where vehicles are stored safely from inclement weather. The house also has a backyard that's at the same level as the house itself, and there is a small deck perched on top of a hill with a hammock to relax on, accessed from a flight of stairs nearby the house.

When Jumba comes looking for Stitch in Lilo & Stitch, the battle between them damages much of the house before an overloading blaster explodes and destroys the entire house. In the end, however, Lilo gets to keep Stitch, and he, Lilo, Cobra, Nani, David, Jumba, and Pleakley end up rebuilding and renovating the demolished house (including moving Lilo's bedroom to a small tower on the roof and repainting it teal instead of its original yellow). Jumba and Pleakley then move in, thus becoming a part of Lilo and Nani's extended ʻohana.

The house in Lilo & Stitch: The Series has a tendency to get repeatedly damaged. In the episode "Melty", the house is destroyed by Experiment 228 (Melty) in an alternate timeline. Gantu has opened up or even blasted the roof in several instances to access the inside; this even led to Jumba adding hinges to the roof to prevent having to repeatedly repair it. In "Mr. Stenchy", Gantu also runs straight through the front door so he could chase down Stitch and grab Experiment 254 (Mr. Stenchy) inside. However, despite both the repeated damage and its working-class appearance, the house is more technologically advanced than other houses on Earth, thanks to the aliens' presence and Jumba's upgrades to the house; Lilo and Stitch's tower bedroom is probably the best example of these upgrades.

In the film's opening of Lilo & Stitch 2: Stitch Has a Glitch, Stitch has a nightmare in which he destroys the house by crashing into it with the red police cruiser.

Considering that Stitch Has a Glitch was released during the Lilo & Stitch: The Series' run, yet takes place before the events of the series, the house has some significant differences in its appearance. In Stitch Has a Glitch, the facade maintains the teal paint seen at the end of the original film, while in the series, the teal paint was changed to appear much more blue. Lilo and Stitch's bedroom is also radically different between the two works. In the series, the bedroom has a somewhat clean sci-fi look to it, Lilo sleeps on her own bed while Stitch sleeps on a hanging cot, and the room is accessed via an elevator platform. In Stitch Has a Glitch, the room has a more natural appearance with wooden flooring that is somewhat messy with toys all over the floor (as expected of most children's bedrooms), Lilo and Stitch sleep on their own bunks on a bunk bed, and the room is accessed via semi-spiraling stairs. The film also showed the roof to be retractable, allowing for views of the night sky, and an antennae appears on top of the roof (this antennae also appeared at the end of the first film, but not in the series). In the series, only the center of the ceiling can be opened to become a skylight, controlled via a button on the wall which Stitch has access to by his bed.

The house is also the home of a few experiments besides Stitch, the only known ones being Experiment 248 (Belle) and Experiment 223 (Glitch).

In Disney Magic Kingdoms, the house appears as an attraction. The game's representation of the house is primarily based on its appearance in Lilo & Stitch: The Series, although the antennae from the end of Lilo & Stitch and Lilo & Stitch 2: Stitch Has a Glitch also appears. It is represented as an attraction where guests can ride hovercrafts around the house, with the carport and the main floor of house itself used as stations. The house's repeated activity, "Rebuilding and renovating...again," is a reference to its tendency to get repeatedly damaged.

The house as it originally appeared throughout most of Lilo & Stitch.

The house as it appeared after it was rebuilt at the end of Lilo & Stitch; Lilo & Stitch 2: Stitch Has a Glitch maintained this design.

The original watercolor painting of the reconstructed house.

The house and Jumba's ship in Lilo & Stitch 2: Stitch Has a Glitch.

The house as it normally appears in Lilo & Stitch: The Series.

The house seen from above at night as depicted in "Morpholomew".

The house ten years into the future in "Skip", showing that there have been a few upgrades made to it since.

The house twenty years into the future in the same episode, having been upgraded even further, but is in disrepair inside. 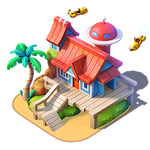 The house as it appears in Disney Magic Kingdoms.

The house as it appeared during the Stitch's Cousin Frenzy! event in Disney Tsum Tsum.