E (ESRB)
Lilo & Stitch: Trouble in Paradise (titled simply Lilo & Stitch on the American PlayStation release) is an action-platform game developed by Blitz Games. It was released for PlayStation and Microsoft Windows on June 14, 2002.

Based on the animated film, Lilo & Stitch: Trouble in Paradise continues the adventures of Lilo and Stitch as they embark on a quest around the island. You must help Stitch avoid bounty hunters and help Lilo work her voodoo magic while scaring enemies. While up against a wide variety of enemies, ranging from a humble turtle to alien bounty hunters, Lilo and Stitch must cross various challenging landscapes and test their wits against moving platforms. 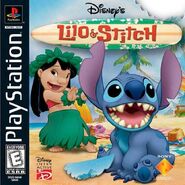