Jane Wagner (2013-present; domestic partner, 1971-2013)
Mary Jean "Lily" Tomlin is an American actress, voice actress, comedian, screenwriter, and producer. She has appeared in several films, such as Nashville, All of Me, and Getting Away with Murder. She also voiced Valerie Frizzle in The Magic School Bus TV series and later reprised her role in the 2017 Netflix sequel series, The Magic School Bus Rides Again.

Her Disney roles include a special guest star appearance in The Muppets Go to the Movies, Ernestine in prerecorded material for Here Come the Muppets, Rose Ratliff/Rose Shelton in the 1988 Touchstone Pictures film, Big Business, Professor Ruth Allen in the 1998 Touchstone Pictures film, Krippendorf's Tribe, Toki in the English dub version of Ponyo, and Janet in The Kid.

Lily Tomlin on The Muppets go to the Movies. 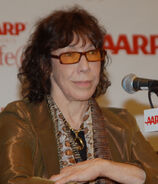 Lily Tomlin in September 2011.
Add a photo to this gallery

Retrieved from "https://disney.fandom.com/wiki/Lily_Tomlin?oldid=3880544"
Community content is available under CC-BY-SA unless otherwise noted.