Lindsay Dee Lohan is an American actress, singer, fashion designer, model, and recording artist who started in the show business as a child fashion model for magazine advertisement and television commercials. She is the older sister of Michael Lohan Jr. At age 10, she began her acting career in the soap opera Another World; at 11, she made her motion picture debut by playing identical twins in Disney's 1998 remake of The Parent Trap. Lohan rose to stardom with her leading roles in the films: Freaky Friday and Herbie: Fully Loaded.

Lohan debuted in Disney's 1998 family comedy The Parent Trap, a remake of the original. She played dual roles of estranged twin sisters who try to reunite their long-divorced parents, played by Dennis Quaid and Natasha Richardson. The film earned $92 million worldwide, and critic Kenneth Turan called Lohan "the soul of this film as much as Hayley Mills was of the original", going on to say that "she is more adept than her predecessor at creating two distinct personalities". The film won Lohan a Young Artist Award for best performance in a feature film as well as a three-film contract with Disney.

At the age of 14, Lohan played Bette Midler's daughter in the pilot episode of the short-lived series, Bette, but resigned her role when the production moved from New York City to Los Angeles. She also starred in two Disney television movies: Life-Size opposite Tyra Banks in 2000, and Get a Clue in 2002. Also in 2002, Lohan dated singer Aaron Carter. There were reports of a feud between her and Hilary Duff, who had also dated Carter, though Lohan later commented that "people just started selling stories ... it was easy to write about."

Lohan starred as Anna Coleman alongside Jamie Lee Curtis in the 2003 family comedy Freaky Friday. At Lohan's own initiative, her character was rewritten and changed from a Goth style to be more relatable. Critic Roger Ebert wrote that Lohan "has that Jodie Foster sort of seriousness and intent focus beneath her teenage persona". Freaky Friday earned Lohan the award for Breakthrough Performance at the 2004 MTV Movie Awards and, as of 2010, it remains her most commercially successful film, earning $160 million worldwide as well as an 88% approval rating on Rotten Tomatoes.

Aiming to become a triple threat—actor, singer, and dancer, similar to Ann-Margret and Marilyn Monroe—Lohan began showcasing her singing through her acting. For the Freaky Friday soundtrack, she sang the closing theme, "Ultimate", as well as recording four songs for the Confessions of a Teenage Drama Queen soundtrack. Producer Emilio Estefan, Jr. signed Lohan to a five-album production deal in 2002.

In 2004, Lohan starred in two lead roles. The first, Confessions of a Teenage Drama Queen—Lohan's first role in a film that was not a remake—earned a domestic box office total of $29 million, with Brandon Gray of Box Office Mojo commenting that it was "well above expectations as it was strictly for young girls". Robert K. Elder of Metromix wrote that, "though still a promising star, Lohan will have to do a little penance before she's forgiven for Confessions". She performed the song I Decide in The Princess Diaries 2: Royal Engagement.

While shooting Herbie: Fully Loaded in 2004, Lohan was hospitalized with a kidney infection brought on by stress in her personal life and of recording her first album while the film was in production, prompting Vanity Fair to label it Lohan's "first disastrous shoot". The magazine also described how Lohan terminated the promotional tour and was de-emphasized on the movie poster due to "un-Disney-like behavior". Lohan began dating actor Wilmer Valderrama in 2004, guest-starring in an episode of That '70s Show, of which Valderrama was a regular. According to Vanity Fair, the breakup with Valderrama contributed to Lohan's issues during the shooting of Herbie: Fully Loaded.

Lohan returned to Disney in 2005 for Herbie: Fully Loaded, the fifth film in the series with the anthropomorphic car Herbie. Fully Loaded earned $144 million worldwide and received mixed reviews. Stephen Holden of The New York Times called Lohan "a genuine star who ... seems completely at home on the screen", while James Berardinelli wrote that, "as bright a starlet as she may be, Lohan ends up playing second fiddle to the car." 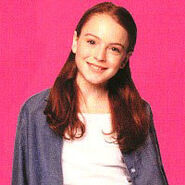 Lexy Gold
(Get a Clue)

Retrieved from "https://disney.fandom.com/wiki/Lindsay_Lohan?oldid=4161943"
Community content is available under CC-BY-SA unless otherwise noted.