Any of his guitar strings being broken

Lionel Griff is the older brother of the title character of the TV series Stanley. He often wears what appears to be headphones and his hobby is playing an electric guitar. In the episode "Kangaroo Clean-Up", he is the antagonist because he makes fun of Stanley for being in trouble and brings in toys to ensure that his brother wouldn't make it by dinnertime, which means that night, he wouldn't get any dessert.

Despite this, and sometimes otherwise antagonizing Stanley, Lionel is shown to truly have familial love for his little brother. He often gives him good advice, helps him with things such as schoolwork, and otherwise looks out for him. He also expresses concern for his safety. In "A Little Squirrel Music", Lionel writes a song about Stanley and squirrels to show his appreciation for Stanley and to try to win him a lifetime supply of peanut butter.

Lionel with Stanley and his schoolmates 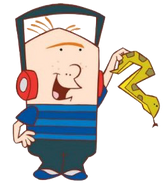 Lionel playing kite with his brother.