Stooge Viller, Shoulders, The Rodent, Little Face, The Brow (until killed by both Flattop and Itchy to begin with)

Being betrayed by his own student

Gets betrayed by Big Boy, killed in a concrete overshoes, and sinks into the river

"Not the bath. Not the bath. Big Boy, not the bath!"
Lips Manlis is Big Boy Caprice's ex-tutor after betrayed, the Club Ritz owner, and one of the minor antagonists from Disney/Touchstone's 1990 film Dick Tracy.

Despite being a ruthless crime boss, Lips is quite naive and easily intimidated. Evidence as he mistakes gangsters as cops and when Big Boy takes everything he owns he is scared and this becomes more apparent when Big Boy tells him that he's going in "the bath".

Lips is the city's biggest crime boss as he spends his nights at the Club Ritz and eat oysters and to listen to Breathless Mahoney's songs. Then, he was encountered by several police officers who were warranted to arrest him, but as he sees Flattop Jones he realizes that the cops are really gangsters who take him to an abandoned warehouse by the city's bay where he meets his former protege Big Boy Caprice who takes everything he owned and disposes of him by drenching him in cement (called "The Bath"). He was presumed dead after he was dropped into the river. 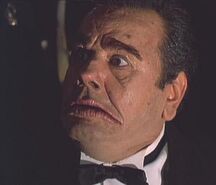 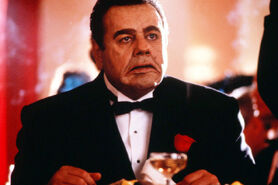 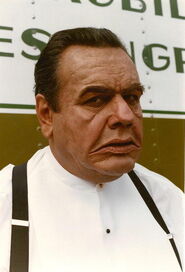 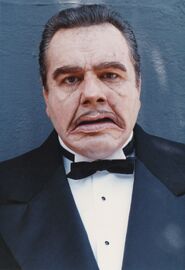 Retrieved from "https://disney.fandom.com/wiki/Lips_Manlis?oldid=3847241"
Community content is available under CC-BY-SA unless otherwise noted.