Not to be confused with Little Brothers.

Fa Mulan
Little Brother is the dog of Fa Mulan and a supporting character in Disney's 1998 animated feature film, Mulan.

In the first movie, Little Brother was Mulan's dog that helped her out with the chores. In a rather weird way, he would get them done. He also disturbs Mulan's father, who was praying. During the end of the movie, he joined Mulan's ancestors' ghosts at the party along with the chickens.

In the second movie, Little Brother watches Mulan training in the field. As a musical number is played, Little Brother plays with the little girls as they learn how to fight.

Little Brother makes a small cameo in Tarzan when several gorillas gather around Archimedes Q. Porter and shake him upside down, causing many items to fall from inside his pockets, one of them resembling Little Brother.

Licking one of the girls 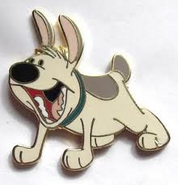