102 Dalmatians: Puppies to the Rescue (Game Boy Color only)

This article is about the dalmatian. For the Gravity Falls episode, see Little Dipper (Gravity Falls).

Little Dipper is one of Dottie and Dipstick's puppies together with Oddball and Domino in 102 Dalmatians. His spots are immaculately patterned to the constellation "Little Dipper," thus giving him his name (this is not official, though, and he's claimed to be named this since he has similar spots to his father's, as well as a black tip on his tail). He also has a blue collar (both in cartoon and live-action) like his father, Dipstick, and his brother, Domino.

Little Dipper first appears as a newborn puppy along with Oddball and Domino. He is later seen when Oddball attempts to get "spots" from a wet black inkjet copier, after she notices that she doesn't have any spots, when she is suddenly flung out the window, but is seen hanging on to the windowsill. Little Dipper and Domino go out and try to save her, to which they succeed. Little Dipper is later shown when Kevin and Chloe go on a date and he and his family are left watching TV. Jean-Pierre Le Pelt then kidnaps him, his siblings, and his mother. Little Dipper is not shown for the rest of the movie, but makes a small appearance at the end of the film with Domino.

Despite being one of Dipstick and Dottie's pups, Little Dipper does not appear in the video game, 102 Dalmatians: Puppies to the Rescue. However, he did appear in the Game Boy Color version at the start of the game and at the end as the puppy filling up the screen.

Clipart of Little Dipper with Domino and Oddball

Clipart of Little Dipper playing with Oddball and Domino 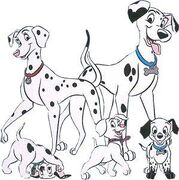 Clipart of Little Dipper and his family 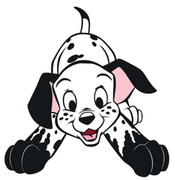 On the floor with Domino. 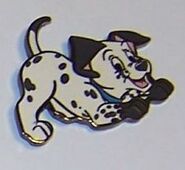 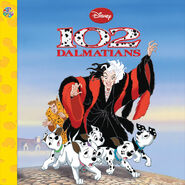