With her mother in the village (formerly)
With the Baker, Cinderella, Jack, and the baby

The Baker and his Wife, Jack, Cinderella

The Wolf, the Giant

The wolf, being blamed for things, the Giant

Lives with Cinderella, the Baker, Jack, and the baby after they kill the Giant

"Oh dear! How uneasy I feel..."
"It was you that destroyed our house, not an earthquake!"

“But a Giant's a person. Aren't we to show forgiveness?”
―Little Red Riding Hood to Cinderella about the giant

Little Red Riding Hood is one of the six tritagonists from the film Into the Woods. She is based on the protagonist from the fairy tale of the same name of Charles Perrault's fairy tale, and her grandmother's fate is closer to the original Charles Perrault story than the Brothers Grimm adaptation.

Little Red Riding Hood is a young girl with a seemingly-endless appetite who journeys into the Woods and finds unexpected adventures.

At the beginning of Into the Woods, Little Red Riding Hood is seen stealing sweets from the Bakery and she tells The Baker and his Wife that it's not for her, it's for her granny in the woods. She then asks for a loaf of bread.

Next, she is seen paying the Baker as he hands her a loaf of bread. She then tells them that she has to leave to go to the woods. The Baker's Wife asks her is she's certain she knows her way. Little Red Riding Hood states that she knows the way and will certainly be safe. The Baker asks if she plans on buying on the sweets, but the Baker's Wife dismisses it and sends Little Red Riding Hood on her way. 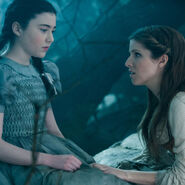 Retrieved from "https://disney.fandom.com/wiki/Little_Red_Riding_Hood_(Into_the_Woods)?oldid=3591523"
Community content is available under CC-BY-SA unless otherwise noted.