Milo and Sailor
Liv Rundgren Tyler is an American actress and former child model. She is well known for playing Arwen the she-elf in the Lord of the Rings film trilogy.

For Disney, she played Grace Stamper in the Touchstone film, Armageddon, Maya Harding in the Miramax film, Jersey Girl, and Eve in the Fox film, Ad Astra. She also played Betty Ross in the 2008 Marvel Studios film The Incredible Hulk.

She is the daughter of Aerosmith lead singer Steven Tyler. 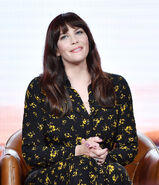 Liv Tyler speaks at the 9-1-1 Lone Star panel at the 2020 Winter TCA Tour.
Add a photo to this gallery

Retrieved from "https://disney.fandom.com/wiki/Liv_Tyler?oldid=4124148"
Community content is available under CC-BY-SA unless otherwise noted.