July 19, 2013 – March 24, 2017
Liv and Maddie, also known as Liv and Maddie: Cali Style in the fourth season, is a Disney Channel Original Series created by John Beck and Ron Hart and produced by It's a Laugh Productions for Disney Channel. It stars Dove Cameron playing two identical twin sisters with opposing personalities who are best friends. The series began production in April and began airing July 19, 2013.

Co-creator Ron Hart announced that the series was cancelled and won't be renewed for a fifth season.[1] That being said, the series ended on March 24, 2017.

The sitcom introduces identical twins Liv, a popular television star whose hit show has just finished its run, and Maddie, an outstanding student and school basketball phenomenon whose popularity is on the rise… that is until Liv makes a triumphant return to their Wisconsin high school. Complicating their teenage life even more is that their parents both work at their school.

Liv returns home from Hollywood, much to the excitement of her and her family, especially her twin, Maddie. After a minor argument due to Liv being self-centered, she tries to make it up to Maddie by pretending to be her and asking out her crush, Diggie. Diggie tells "Maddie" that he doesn't feel that way about her. Liv tells Maddie this, they get into a huge fight ending with, Liv packing her bags on her way back to Hollywood. Afterward, Diggie tells Maddie that he told her no because he knew it was Liv, and askes her to the dance. Also, Karen and Pete try it convince Liv to stay by showing her an art project she and Maddie made with the caption "Sisters by chance, friends by choice". Liv and Maddie apologize and make up. Meanwhile, their brothers Joey and Parker are taking advantage of the fact that their parents are so occupied by Liv and Maddie by turning their room into a "bro cave" complete with a TV and refrigerator. They are caught when, while moving the refridgerator, it falls down the stairs.

Maddie is voted captian of her basketball team, it is unsure of what to do when the principal won't provide them with suitable uniforms for a tournament they plan to go to. Liv joins the team in order to help Maddie be a better leader. The team confronts the principal about the uniforms, but he retaliates by saying they aren't going to the tournament. He told them that he would only fund things the school cares about. The girls raise money for the uniforms by selling team wristbands to students. The principal agrees to send the girls to the tournament. Meanwhile, Parker has brought tarantulas home from school. When they escape, he and Joey rush to locate them.

Liv want her and her little brother Parker to have a close relationship again after growing apart all those years she was in Hollywood, so she volunteers to chaperone his sleepover, which needs to be really fun so Parker will be invited to other parties. First, she plans activities and serves snacks that Parker liked when he was little, which was not a huge success. After receiving some advice on what ten-year-old boys like, Liv creates an activity that is a big hit with the boys. Unfortunately, Liv ends up vomiting the bad fish sticks in the backyard, but the boys then have a good time making fun of her. Meanwhile, Maddie and her friend Willow work on a school project on the French Revolution and Pete takes a reluctant Joey out for a night of fun.

Liv realizes that she needs to make friends to hang out with besides her sister, Maddie. Wanting to help, Maddie tries to set Liv up with Ocean, a girl who doesn't have a TV and doesn't care that Liv is a big TV star. Liv accidentally finds out and tells Ocean that she doesn't need a "pity friend". In an attempt to pick her own friends, Liv picks Kylie, a "bad girl" who's gotten kicked out of three schools. Maddie warns Liv against hanging out with Kylie, but she doesn't listen. Liv cuts school with Kylie to go to the mall. Kylie steals a pair of sunglasses and hands them to Liv. After they get caught, Liv drops the sunglasses and runs off. Maddie, who had just arrived at the mall to get Liv back at school, picks up the sunglasses and is accused of shoplifting. She takes the blame for Liv and her punishment is being benched in the upcoming basketball game against the school rivals, the Ravens. Liv comes clean and Maddie plays in the game. Meanwhile, Joey has gotten a job at the mall to pay his parents back for buying him a new phone. 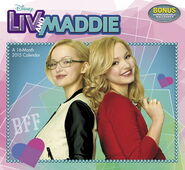 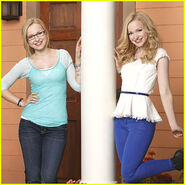 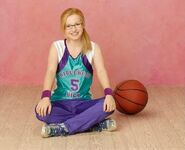 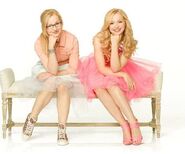 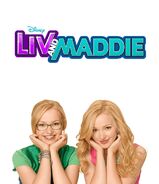 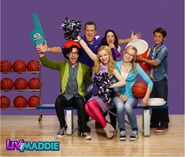 Retrieved from "https://disney.fandom.com/wiki/Liv_and_Maddie?oldid=4380776"
Community content is available under CC-BY-SA unless otherwise noted.