"My woman ain't pretty, but she don't swear none."
Liver Lips McGrowl is a slightly-chubby brown bear who performs in the Country Bear Jamboree attractions at the Disney theme parks.

He gets his name from his big puckered-up lips. He plays the guitar and occasionally impersonates Elvis.

He also appears in the parks as a walk-around character along with fellow Country Bears Big Al, Wendell, and Shaker.

Liver-Lips McGrowl is a homebody who is never home. His career has spanned the entertainment world, and he is equally famous in radio, TV, night clubs and the circus. His throaty growl has captivated audiences everywhere, and he had played return engagements in such famous towns as Paris (Kentucky), Rome (Tennessee), Berlin (Wisconsin), Athens (Georgia), Cairo (Illinois), and Stuttgart (Arkansas). But his heart is always at home, where the Miami Serenader can guzzle home cookin’ and catch up on his whittlin’. He has whittled a rain barrel, a bathtub, a pig trough, and a sump pump. 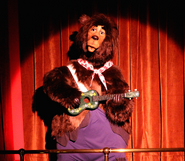 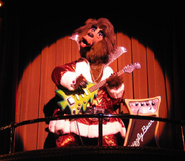 Liver Lips as a walk-around character in Disneyland.

Liver Lips with Wendell and Shaker in Disneyland Fun.

In Disney on Parade
Add a photo to this gallery
Retrieved from "https://disney.fandom.com/wiki/Liver_Lips_McGrowl?oldid=4024225"
Community content is available under CC-BY-SA unless otherwise noted.