Living with the Land

Living with the Land

40 on a ten row boat. 36 on an ADA boat (Plus a wheelchair and a companion seat)

20 on a five row lead boat or tandem boat. 15 on a key boat (Plus a wheelchair and companion seat)

Kraft (1982-1992)
Nestle (1993-2009)
Chiquita Brands International (2011-Present)
Living with the Land (originally Listen to the Land) is a ride located within The Land pavilion in Epcot at the Walt Disney World Resort in Orlando, Florida. It is a slow-moving boat ride, which is part dark-ride and part greenhouse tour. The focus on the ride is on agriculture, especially new technology to make agriculture more efficient and environmentally friendly.

Living with the Land was originally developed as a suspended dark ride called Blueprints of Nature. Traveling underground to a carousel theater preshow, guests would be introduced to the Landkeeper, the attraction's host. From there, the Landkeeper would take guests on a hot-air balloon trip through the four seasons and a series of simulated biomes located in greenhouses at the front of the pavilion. These plans would be scaled back when Kraft came aboard as a sponsor and the attraction would become a boat ride, with the Landkeeper character being repurposed into the Dreamfinder at the neighboring Imagination attraction. The greenhouse portions of the pavilion would become focused on showcasing new agricultural techniques, while the dark ride portion would become the simulated biome portion.

Opening with Epcot as Listen to the Land, the attraction originally featured a song of the same name and an opening sequence called "Symphony of the Seed", which was a whimsical look at how plants grow with massive twisted roots designed by Disney background artist Walter Peregoy. This sequence would be replaced by a thunderstorm scene when the attraction was retooled and renamed in 1994.

The dark-ride portion of the attraction opens with a scene of a deciduous forest in the middle of a thunderstorm, illustrating how the forces that shape the land can appear destructive to us. The boat then sails through artificial biomes representing a tropical rainforest, a desert and the American prairie. Some of the Audio-Animatronic figures in this section were originally created for the never-built Magic Kingdom attraction, Western River Expedition. The biomes feature sound and lighting effects, in addition to heat, wind and mist, to simulate real conditions. The boats float through a small theater that illustrates the relationship between humans and the environment, and the ways that we have been modifying the land to better serve our purposes.

The second part of the attraction takes place in The Land's "Living Laboratory", which showcases ideas about the future of agriculture. There are five distinct areas of the "living laboratory" which includes the Tropic Greenhouse, Aqua-cell, Temperate Greenhouse, String Greenhouse, and the Creative Greenhouse. It also contains the Biotechnology Lab and the Integrated Pest Management Lab. All of the plants in this section are grown through various methods of hydroponics. Plants are grown in sand, perlite, coconut coir, and rockwool.

The ride concludes with a lighted collage of people and produce from all over the world, along with a projection of Earth as seen from space.

Distinct areas of the "living laboratory" 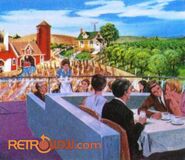