Peter (formerly), her family, spending time with her friends

Liz Allan is a character from Marvel Comics. She appears in Spider-Man: Homecoming film, being originally called Liz Toomes but changes her name by the time of the events of Spider-Man: No Way Home. She is Peter Parker's schoolmate at Midtown High and his former crush.

Liz is a high school student at Midtown High and the daughter of Adrian Toomes and Doris Toomes. She is the captain of her school's academic decathlon, which her classmate, Peter Parker's, is also apart of. Liz and Peter develop an interest in each other and eventually, Peter asks her out as his date for the school homecoming, to which she agrees to. However, Peter discovers Liz's father is the supervillain Vulture. Peter, wishing to protect Liz from Adrian's criminal nature, is forced to leave Liz at the prom and go after Adrian himself, making Liz downtrodden. Thanks to Peter's efforts as Spider-Man, Adrian is arrested and sent to prison, which causes Liz and her mother to decide on moving to Oregon as Adrian didn't want them during his trial. While gathering her things from school, Liz expresses her dissatisfaction over what Peter did at the dance, but encourages him to move on and wishes him luck in his own endeavors.

After Mysterio exposed to the world that the real identity of Spider-Man is Peter Parker, Liz appears on the cover of People magazine saying that Peter is a liar and tells details about her past relationship with him. The magazine has her surname as "Allan", indicating that she changed her name at some point after the events of Homecoming.

Despite not appearing in the Ultimate Spider-Man, Liz appears in the series's tie-in comic book series. She appears in a small arc watching a football match alongside Mary Jane Watson, and becomes tearfully devastated when the mascot of Midtown High's football team goes missing.

Liz Allan is a recurring character on the show. She eventually takes up the role of the blogging costumed anti-heroine Screwball. 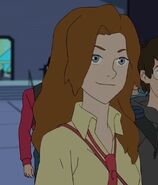 Liz Allan as she appears in Marvel's Spider-Man

Liz Allan (next to Mary Jane Watson) in the comic book adaptation of Ultimate Spider-Man.