Nicholas Foster
Elizabeth "Liz" Callaway is an American actress, singer, and recording artist, who first provided an additional voice to Beauty and the Beast, but went on to provide the singing voices of Jasmine in The Return of Jafar and Aladdin and the King of Thieves (replacing Lea Salonga) and Kiara in The Lion King II: Simba's Pride. She also sang "I See a New You" in the perspective of Chris in the direct-to-video Brave Little Toaster sequel, The Brave Little Toaster Goes to Mars.

Callaway would continue to lend her singing voice for other production companies, such as singing voice of Princess Odette in Warner Bros' The Swan Princess, and Anastasia in the 1997 Fox film of the same name.

Callaway also appeared in various theatre productions of Merrily We Roll Along, Carrie, Baby, The Spitfire Grill, Sunday in the Park with George, Evita, Cats, Miss Saigon, Sunset Boulevard, and The Look of Love.

So far, Callaway has only provided the singing voices of a few female Disney characters, and therefore appears on their respective soundtracks.

Callaway's most renowned song in terms of Disney is probably her duet with Gene Miller, entitled "Love Will Find a Way" from The Lion King II. 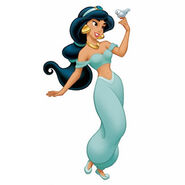 Jasmine
(The Return of Jafar and The King of Thieves; singing voice)