Stanley † (husband)
Lizzie is a supporting character in the Disney/Pixar Cars franchise.

When Lizzie first rolled into Radiator Springs in 1927, it was love at first sight -- love for the town and love for Stanley, the town founder. But she kept Stanley on the soft shoulder for months. Until one day, she realized that Stanley's vision for a new oasis in the desert had enraptured her, too. From that day on, the two became the inseparable heart and soul of the town.

Lizzie is a Radiator Springs original. She's a little old lady, but still an active businesswoman who uses her moxie to sell bumper stickers, mud flaps, and other Route 66 memorabilia from her curio shop. She's as feisty as she is brash. Lizzie's unswerving frankness and offbeat comments keep the townsfolk and tourists on their toes, even though she has no idea what she's just said.

Lizzie is one of the oldest living citizens of Radiator Springs. She is very old and fragile where she has a tendency to forget things very quickly. However, despite her forgetfulness, Lizzie is very witty where she makes sassy comments such as noting how unclean Luigi's shop is and how crazy McQueen is for talking to himself. Despite her sass, Lizzie is very kind-hearted and grandmotherly as she does care for her friends.

When Lizzie was married to Stanley, she was shown to be very much in love as she was a devoted wife. After Stanley passed away, Lizzie continued to miss and mourn for him, wishing he could see how the town he built was brought to life, thanks to McQueen.

Lizzie is a 1923 Ford Model T 2-Door Sedan that is painted entirely black, with headlights that have a gray tint to them. She has a spare tire attached to her trunk, but with a chrome interior, as opposed to her four black rims.

Lizzie owns the Radiator Springs Curios shop and has been living in Radiator Springs ever since the town got off the map. She is first seen sleeping at her shop when racecar Lightning McQueen drives into Radiator Springs and accidentally destroys the town's road. When he's brought up to court the next day, Lizzie angry glares at him and supports Sally Carrera's decision to have McQueen fix the road. As McQueen fixes the road by pulling Bessie, Lizzie asks Red to move aside so she can watch McQueen work by calling him a "hot rod," implying she's developed some sort of a crush on him. When two cars arrive at Radiator Springs, Lizzie puts a bumper sticker on the back of the male car as a "way to remember 'them' by" and looks disappointed when they left.

When McQueen makes the road worse by trying to speed up his progress, Lizzie watches Doc Hudson challenge McQueen to a race and witnesses McQueen lose the race by falling into a cactus pit after failing to make a turn onto the dirt track. The next day, Lizzie joins the town's residents in driving on part of the new road that McQueen finished. She comments to Luigi that the new road makes his shop look like a dump, offending Luigi until he realizes that she is right. When McQueen contains to work on the road, Lizzie comments him that people will think he's crazy if he keeps talking to himself which McQueen sarcastically thanks her giving him the tip, causing Lizzie to say that she wasn't talking to him.

At Flo's V8 Café, when McQueen tries to explain to everyone that Doc is really a famous racecar, Lizzie bursts into laughter and does not believe him while commenting how red McQueen is getting. Lizzie then watches McQueen leave with Sally to go out for a drive instead of running off.

When McQueen finally finishes fixing the road, Lizzie seems saddened as she believes McQueen left, but becomes overjoyed when she sees that he hasn't left. When McQueen does a shopping around town, Lizzie shows him around her shop and gives him three bumper stickers. After McQueen gets a makeover, he tries to signal Lizzie to turn on the radio and the town's fixed neon lights though she forgets so Red does it for her. Everyone begins to party around and have fun where Lizzie mistakenly cruises with McQueen, thinking he asked her when he asked Sally. Lizzie talks to McQueen about her life, but he manages to get away from and reunite with Sally, thanks to Mater. Lizzie, noticing how well the town came back to life, is seen talking to the statue of her husband, saying, "Oh, Stanley, I wish you could see this.", implying that she still misses him.

When McQueen is suddenly taken away by the press due to being informed by Doc, Lizzie becomes depressed and sadly walks into her shop, turning off her lights. Doc, regretting his decision, tells everyone of his time being a racecar and grabs a handful of Radiator Springs' residents to support McQueen at the race in California while Lizzie, Red, and Sally stay behind. As Lizzie, Red, and Sally watch the race on TV, she forgets that Doc is at the race she yells for Doc to "come have a look at this fellow on the radio" who looks just like him (it was). Lizzie then watches McQueen forgo his chance to win the Piston Cup by helping the injured King cross the finish line, fondly remarking "That's my hot rod."

Lizzie is seen in the end credits where Radiator Springs is back on the map due McQueen setting up his racing headquarters there and enjoys spending time with her friends.

Lizzie is a minor character in the second film. She appears with the other townsfolk greeting Lightning McQueen back to Radiator Springs, unaware that he had been gone. Later, when McQueen and Mater are spending time together, Lizzie dresses as a train to scare them when they go driving on an old railroad track, laughing as she manages to scare them when they enter a tunnel.

In the end, Lizzie is seen with Mack, listening to Mater to tell his adventures in defeating a criminal organization of cars known as "Lemons" and witnessed the arrival of British agents Finn McMissile and Holley Shiftwell. After hearing Holley keeping a dent and deeming it "valuable," Lizzie remarked she was crazy as Mater while Mack commented that Mater and Holley make a great couple.

Lizzie returns in the third film, first appearing taking a nap on her porch. She says goodbye to Lightning when he leaves to go to the Rust-eze Racing Center, though she thinks he is going to college. She also watches the Florida 500 on television with Red and Sheriff and, during the credits, trains with Lightning, Mater, and Cruz at the Racing Center.

In the first chapter of the story, Lightning visits Lizzie at her Curio Shop and finds her looking at her postcards. However, he knocks over a shelf, which starts a chain reaction resulting in a fan blowing the postcards out the door. Lightning goes out to find them, but when he finds them all and returns them, Lizzie has forgotten that they were lost.

She can usually be found driving around Radiator Springs earlier in the story, then in Tailfin Pass later on. She does not appear in any races, nor is she a playable character.

Lizzie appears in the Radiator Springs Curios activity in Cars: Radiator Springs Adventures. She is on her front porch watching the paint dry when Lightning comes to look for some things to decorate his racing headquarters. She agrees to help, but due to her tendency to forget how she organizes everything, Lightning has to help her put everything back. Lizzie also appears in a Legends Race.

In Cars: Mater-National Championship, as Lightning competes in the various races and events, Lizzie rewards him with stickers in which there are seven in total. Once Lightning has completed all of the events, he takes them off and puts them on a sign in front of his Racing HQ. Once again, she does not appear in any races or as a playable character, but she also does not appear driving around Radiator Springs.

Lizzie can be found parked outside of her shop in The World of Cars Online. 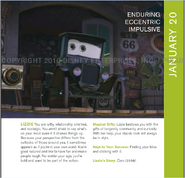 "Red, could you move over please? I wanna take a look at that sexy hot rod!"

Lizzie becoming happy to see McQueen is still in town.

Lizzie watching the tiebreaker race on TV with Red and Sally, while being confused about Doc Hudson

Lizzie dressed up as a train.
Add a photo to this gallery

Retrieved from "https://disney.fandom.com/wiki/Lizzie_(Cars)?oldid=4458720"
Community content is available under CC-BY-SA unless otherwise noted.