1999–present
Elizabeth Anne "Lizzy" Caplan is an American actress. She is known for several film roles, such as Janis Ian in the 2004 comedy Mean Girls, Marlena Diamond in the 2008 drama Cloverfield, and April Drennan in the 2010 comedy Hot Tub Time Machine.

For Disney, she played Claire Wise in Marvel One-Shot: Item 47 and Sarah in the ABC TV show, Once and Again.

Lizzy Caplan speaks at the Masters of Sex panel at the Showtime portion of the 2015 Sumer TCA Tour. 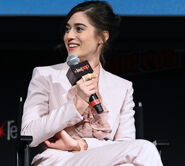 Lizzy Caplan speaks at the 2019 New York Comic Con.
Add a photo to this gallery
Retrieved from "https://disney.fandom.com/wiki/Lizzy_Caplan?oldid=4123500"
Community content is available under CC-BY-SA unless otherwise noted.