Disney Wiki
Register
Don't have an account?
Sign In
Advertisement
in: Characters, Villains, The Nightmare Before Christmas characters,
and 25 more
English

Lock, Shock, and Barrel (collectively known as Boogie's Boys) are the secondary antagonists of Tim Burton's 1993 stop-motion Disney film, The Nightmare Before Christmas. They are a mischievous trio of trick-or-treaters from Halloween Town that served as Oogie Boogie's henchmen and were responsible for kidnapping Santa Claus and temporarily ruining Christmas. Although they are always seen together, the trio appears to have trouble with one another from time-to-time, seeming to disagree and argue over little problems.

Lock is the leader of Oogie's Boys, but does not always think thoroughly and actually appears to be just the second most intelligent, next to Shock. Lock wears a devil costume; his teeth are pointed sharply, his face is narrow with a pointy chin, and his hair is waxed into two horns, making him quite literally a handsome devil. His barbed tail is actually real and connected to his body. He loves being large and in charge, and gets upset when others insult him or take the lead. However, he goes along with others' ideas if he cannot come up with anything himself. He proves himself to be right occasionally, such as when he insisted Santa Claus can fit into anything (i.e. chimneys, Oogie's sacrificial shoot).

Lock is dressed as a devil, wearing a plain, long-sleeved, long red shirt, and pants of the same color. His brown shoes have pointed toes that curl upward. His skin is an unhealthy grayish-white color, his eyes are an eerie yellow and his lips are sky blue. His upper eyelids are a pink color, while the lower one is periwinkle. His chin is rather large and the top of his head is quite flat. His ears are set rather low on his head, and his eyebrows are the same shade of red as his clothes, while the rest of his hair is a darker red-brown color. He styles his hair in such a way that he has two "horns" in the front. His nose is pointed, but not nearly as large as Shock's. His mask is a faded red devil's face with horns that curve upward much more than Lock's hair. The mask's mouth is curled into a ghastly smile, showing sharp teeth.

Lock was voiced by Paul Reubens in the original film and Oogie's Revenge, while Jess Harnell filled in for the Kingdom Hearts series.

Shock is the most cunning, the most intelligent, the most skeptical, and the only female of Oogie's minions. She has some contempt for the other two for their supposed stupidity, and often challenges Lock for leadership, but ends up following his orders usually. Shock wears a purple witch costume with an elongated hat. There is no difference between her mask and her face, other than the former's green color and lack of any features (except eye-holes and a nose). She is usually quick to patch up any arguments between her and the boys, if not with the nicest methods.

Shock, the only girl of the group, is the tallest, being only slightly taller than Lock, and as well as the thinnest. She is dressed as a witch, wearing a pale purple witch's hat that is about the same height (perhaps even taller) than her. Her hair is wiry and blue, the same color as the makeup she wears around her eyes. She has pale blue lips and deathly gray-white skin. Her face and neck are quite long and her nose is enormous and pointed, taking up most of her face. Shock's mask is a plain green one that sports the same large nose as her own face, and its mouth is set in a deep frown. She wears a pale purple dress with a dark purple hem, as well as black boots. She also wears black gloves.

Shock was voiced by Catherine O'Hara in the original film and Kath Soucie in subsequent appearances such as video games.

Barrel is considered the stupidest of the three troublemakers, despite his protests to the contrary. He is the butt of many jokes made by his cohorts but usually gets even through his own tricks at which he always gets away with. Barrel wears a skeleton costume and has deformed feet, but otherwise resembles a small human boy, albeit one with white skin, sunken eyes, and perfectly combed green hair. His face is round and has a perpetual grin, except when he is angry. Barrel is usually the pilot of the walking bathtub the trio use as transport. He also likes to eat lollipops.

Barrel is the shortest and chubbiest of the trio, sporting the same gray-white skin as his friends, along with forest green lips. His head is spherical and he has short, pale green hair. His nose is very small when compared to Lock and Shock's, and it is upturned. His bloodshot eyes are quite close together and appear to be sunken in, though this could just be an illusion created by the dark makeup around them. Barrel dresses up like a skeleton, wearing gray pants and a like-colored shirt. Both of these pieces of clothing are decorated with bones roughly corresponding to their locations in the human body. His feet are oddly shaped, with three toes of the same length. His mask is that of a skull; a simple, round, white mask with the mouth being bare teeth set in a wide grin, reflecting the fact that Barrel himself is usually grinning.

Barrel was voiced by songwriter Danny Elfman in the original film. Jeff Bennett played the part for the Kingdom Hearts series, while Dee Bradley Baker came in for Oogie's Revenge.

Lock, Shock, and Barrel are introduced as Oogie Boogie's "little henchmen". However, they are not very loyal to Oogie as they are simply making mischief to stay on his good side (in other words they serve him out of fear) and would prefer to do harmless fun which they seem to enjoy more. Instructing them to "leave that no-account Oogie Boogie out of this!", Jack sends Lock, Shock, and Barrel to "Kidnap the Sandy Claws" (the Halloween Town residents' mistaken name for Santa Claus). At first, they accidentally capture the Easter Bunny, whereupon Jack apologizes to it and orders the trio to take the bunny home. They then capture their true quarry after a good many days. The trio takes Santa Claus to Oogie's lair, where Oogie taunts and threatens Santa. Shortly after Jack defeats Oogie and rescues Santa Claus, a hatch above opens and Lock, Shock, and Barrel appear, having led the Mayor to Oogie's lair. In the deleted scenes, a sequence shows Lock, Shock, and Barrel spectating as Oogie tortures and teases Santa Claus and Sally the rag doll. They watch from their moving cage that hangs on a rope; Jack slips down and scares them away before entering Oogie's lair. Following Oogie's sudden death, they appeared to have redeemed themselves, finding out that Jack survived the crash. They helped Jack, Sally, and Santa Claus escape Oogie's lair, along with the Mayor. They were among the citizens surprised when it started to snow in Halloween Town, and were last seen having a snowball fight. The only time their names are mentioned in the movie is the scene they say them to the mayor, arguing that Jack had sent for them by name.

Emoticon versions of Lock, Shock, and Barrel appear in The Nightmare Before Christmas episode of As Told by Emoji.

Jack, once again tired of the same old tricks for Halloween, leaves town in search of new ideas. In his absence, Lock, Shock, and Barrel resurrect their master Oogie Boogie, allowing him to inflict terror over Halloween Town once again. Oogie kidnaps the Holiday Leaders for Valentine's Day, St. Patrick's Day, Thanksgiving, Independence Day, and Easter, and imprisons them in his underground lair. Lock, Shock, and Barrel are entrusted with hiding each of the seven Holiday Doors in each area of the town where they wouldn't be discovered. They also raise armies of ghosts and skeletons to counteract Jack's inevitable attempt to fight upon his return. Shortly after Jack comes back, he encounters the trio in the Graveyard, and they refuse to reverse the damage.

Lock engages him in battle and retreats after his skeletons are defeated. When Jack goes to free Sally, Lock fights him once more, this time entering the fray himself, but loses again. Soon after, when Jack attempts to free Dr. Finkelstein, Shock confronts him with an army of ghosts but retreats upon losing. She confronts him again at the Doctor's Lab, using giant metal balls to deter Jack from climbing the spiral ramp to the lab. Like Lock, Jack warns her to stop helping Oogie, and like Lock, she agrees but crosses her fingers behind her back. They're next seen at the Pumpkin Patch, where Barrel forces Jack to navigate a maze he's created to reach him in the Big Pumpkin Head. Upon succeeding, Jack fights Barrel and the skeletons under his control, taking from him the Thanksgiving Door and the key to the Residential Area. When Jack reaches the Mayor's house, he finds Lock, Shock, and Barrel on the roof, where they face off one last time.

Upon their defeat, Jack claims the Independence Day door, but the trio uses a trick switch to open a void beneath him, dropping him into Oogie's underground lair and remarking, "Looks like he really fell for that one." They are not seen or mentioned for the remainder of the game after this. 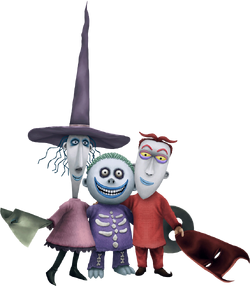 Lock, Shock, and Barrel appear as antagonists in the world of Halloween Town in several installments in the series, regularly serving as morally ambiguous goons of Oogie Boogie.

In the original Kingdom Hearts, Lock, Shock, and Barrel learn that Jack and Dr. Finklestein were working together to create a heart. Knowing Oogie has a goal to control a hoard of creatures known as the Heartless, the trio informs Oogie of Jack's latest endeavor, and are immediately sent to steal it. After doing so, Jack, Sora, Donald, and Goofy, follow them to Oogie's lair where they're defeated and forced to surrender.

In Kingdom Hearts 358/2 Days, the trio returns, repeatedly playing tricks on Roxas during his missions throughout his visits in Halloween Town.

In Kingdom Hearts II, Lock, Shock, and Barrel are seen serving as Dr. Finkelstein's assistants. After intentionally causing mayhem during the doctor's latest experiment, the trio run off into town, eventually bumping into Maleficent, who recruits the trio in her plot to turn Santa Claus into a Heartless. After a while, Lock, Shock, and Barrel mention Oogie, who was killed in the original game by Jack and Sora. His mention promotes Maleficent to revive the boogy man, enlisting him in assisting her, as well, while Lock, Shock, and Barrel have left to battle Sora and Jack with the aid of a giant Heartless, though they soon meet defeat.

In the second visit, they are blamed for stealing Christmas presents from Santa. In the inevitable chase afterward, Jack and Sora learn the trio were only looking for parts for the doctor's experiment, proving themselves to be innocent.

The Disney Wiki has a collection of images and media related to Lock, Shock, and Barrel.