Her friends and family, fashion, money

Working, school, her friends being mistreated

Ivana
London Tipton is one of the main characters of The Suite Life franchise. She is the only daughter of Wilfred Tipton, the owner of The Tipton Industries. London is good friends with Maddie, Bailey, Zack, Cody, Marcus, Woody, Maya, Corrie, Francesca, Chelsea, Max, Mary Margaret, and Tiffany.

London is the daughter of Wilfred Tipton and his third wife (who is unseen throughout the series). London switches between her birth mother and her father, and never really had any quality family time with either. Since she was a young child, London has always worn designer clothing including designer diapers. She has a lot of interest in fashion (as mentioned in That's So Suite Life of Hannah Montana). London looked up to her father, but he was never really there for her. When she moved into the Tipton Hotel, she was taken care of by Marion Moseby and she developed a very great bond with him throughout the series.

The Suite Life of Zack & Cody

London had a tough childhood because her father was always away on business and constantly marrying different women (such as Brandi Tipton). She once mentioned in "Marriage 101" that her father has married 12 times. In the episode "Ala-ka-scram!", her father married the magician's assistant. When she was a little child, her father did not attend any of London's plays in her childhood years because he was supposedly very busy. London told Maddie in "Lip Synchin' in the Rain" that her father did not bother attending any of her school performances (such as Itsy Bitsy Spider).

When she was growing, she started to cover the emptiness her father created when she discovered shopping as Maddie discovered in "Kisses & Basketball", she buys things she doesn't need only to cover the emptiness in her heart, her habit doesn't noticeably lessen and is never mentioned again. Despite her wealth and outward happiness, she is miserable, because her father never appeared when she needed him, such as when the Tipton family lose all of their money in the episode "Poor Little Rich Girl", and during the father-daughter dance at London's school in the episode "The Prince & the Plunger". It was also mentioned that London wore Arturo Vitali Diapers when she was still a baby.

At the age of 15, she met Maddie Fitzpatrick, who eventually became her best friend. London enrolled at Maddie's Catholic school, Our Lady Of Perpetual Sorrow after her father tried to attend Parents Night at London's old school and they had never heard of her. Later on, London was expelled because she did not attend her classes. When her father heard about her expulsion, he sent her to the Seven Seas High, a high school program at the S.S. Tipton, because, on a ship, she would not be able to escape to another place (except by helicopter or submarine). London often complains about Seven Seas High and how much she "hate[s] this stupid sea-school."

The Suite Life on Deck

At the start of "The Suite Life Sets Sail", she believed she was boarding the S.S. Tipton for a vacation, but when she was already in the ship, Moseby told her her father put her in the Seven Seas High because she always escaped from her classes. Also at the end of The Suite Life Sets Sail, she escaped from the S.S. Tipton and went to Parrot Island. Also, in one of her show episodes, "Stupid Sea School", she said she was angry with her father only for putting her in the ship.

London eats dolphin food, giving her the ability to talk to animals. She hears from some crabs about their escape and they make her promise not to tell. Bailey asks "What escape?" when London makes the promise, but London replies with "If I told you, I wouldn't NOT be telling you". The crabs escape. Then she hears from dolphins that Zack and Cody are part of the Gemini project now, so she joins in on a rescue. She helps her friends save the twins and stop the merge from happening.

London has a very unique personality. She is selfish most of the time but often chooses to be more heartwarming and kind, especially to her closest friends. Growing up with money running in her family and being spoiled rotten, London can be very greedy, even to the point where she can receive thousands of dollars or bars of gold for her allowance. She can be very critical and often makes fun of Maddie in The Suite Life of Zack & Cody or her roommate Bailey in The Suite Life on Deck.

London's work ethic is sorely lacking. She disregards school, prefers to take credit for others' work, and hates doing work, even if she's getting paid. She does absolutely everything to get out of chores, classes, and various jobs.

As a stereotype of a rich heiress, London, most of the time, is as sharp as a spoon, though her exact intelligence seems to vary between episodes. She never attended her original school, and got kicked out of Catholic school and then high school. Due to this, she is completely illiterate and has never learned how to read or write. London seems much more intelligent in Zack and Cody than in On Deck. Miss Tutweiller helps London with "shining stars" (a.k.a. her speech in "It's All Greek to Me") but are actually stickers. (In her fantasy dream, she played Aphrodite, and Miss Tutweiller played Athena and Athena gave her stars from Orion's belt.) But like in her old school, she does not perform well academically and has apparently been held back since she attends class with students younger than her. She does a science project with Zack and Woody in "Sea Monster Mash" but has great reluctance to do it since she has never done her own projects before. Her worst subject is language arts, since she doesn’t know how to read or write.

Despite being a moron, London has shown signs of great hidden intellect, though ironically she hates to do anything with it. She is great at calligraphy (though she vows never to use it again when she gets her phone back), and is an excellent chess player. It seems that she does not have a lack of intelligence so much as a lack of effort to learn. (Although Mr. Moseby tried hard to teach her the alphabet for 14 years, which she still calls her "ABDs") It's also been said by some fans that she gets dumber and more illiterate with every season. It is said at one point that she did not learn to talk until she was 9.

Although she is shown to be able to be very deceptive, like in Lost at Sea she tricked everybody into believing she was under a lot of stress so she didn't have to work. When it comes to homework, London never does it, except for one time where it was actually lines of lipstick though she did get a "D" because Miss Tutweiller liked the shade of the color. Also, she once tried to bribe Miss Tutweiller by stapling a $100 bill to each page and in when she did her science project, she got too impatient and fed the plant she was working with an energy drink, creating a vine monster in the process that she, Zack, and Woody had gotten caught in.

London cares about her appearance and tries very hard to wear clothes which are considered beautiful and trendy, which consists largely of designer clothes. She exhibits this behavior enough that, in an episode where Maddie tricks her into thinking a dress is made by someone famous, she freaks out after wearing it. Because of her constant need to wear the newest thing, she has several locations that house her clothes, including a several-story closet, a second room, a lifeboat, and others. 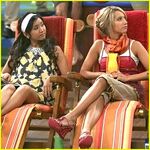 London as the Evil Queen