Can shapeshift into a snake form
Lord Cedric is an antagonist of the series W.I.T.C.H. Faithful to Prince Phobos and general in Prince Phobos’ army, he was entrusted with the task of finding Phobos’ lost sister, Elyon, and opens "Ye Olde Book Shop" on Earth, as well adopting a false human identity, Cedric Hoffman. Despite his orders to deceive Elyon, he felt certain affection for her. In the comics, he later falls in love with Orube, but dies shortly afterwards when he sacrifices himself to save her from Ludmoore.

At the climax of the first season, he is shrunk into a little snake-like imp by Phobos as a punishment for failure and is imprisoned along with his master after his defeat.

Towards the end of the second season Cedric was released and devoured Phobos in his moment of glory, ingesting the power of Phobos and the Seal of Nerissa which contained the essence of Nerissa, Elyon, Yan Lin, Kadma, Halinor, and Cassidy. Swelling to a tremendous size and becoming nearly invincible, Cedric demanded that the Knights of Vengeance pledge their allegiance to him. Miranda did so because the two were lovers. Frost and Tracker did so. Sandpit, Gargoyle, and Raythor did not because they supported the Guardians. Sending Miranda to devour the Aurameres, Cedric went to Earth and did battle with the Knights and the Guardians. Meanwhile inside the Seal (which was inside Cedric), Kadma, Yan Lin, Cassidy, Halinor, Nerissa and Elyon joined their powers to break free.

Cedric lost his power and as he fell he coughed up Phobos, and the Seal which separated the Heart of Zamballa and Weira's jewel which still contained the previous Guardians and Elyon. Phobos passed out from exhaustion built up from his fighting to stay alive inside Cedric and Cedric passed out from the mental stress of defeat. The two comatose villains were then re-imprisoned.

In the comics, Cedric is sprung from prison by Phobos, who is posing as Endarno. Cedric is able to travel to Earth and attempts to steal the Heart of Kandrakar from Will, but is thwarted by Matt Olsen. Later, Phobos betrays Cedric by attempting to have him re-arrested (as he feels Cedric is no longer needed for his plan), but Cedric escapes and steals the Crown of Light in order to get revenge on Phobos. The Crown is taken back by Elyon and Cedric is imprisoned once more. However, the Oracle sees that Cedric may not be purely evil and, after stripping him of his powers, releases him and sets him back up in his book store on Earth. Cedric blames the Guardians for his losses and vows to destroy them. His hatred attracts the spirit of Jonathan Ludmoore, who is imprisoned in a magical book and manifests himself as a floating eye. Ludmoore begins to use Cedric's hatred to control his thoughts and make him do his bidding, though Cedric is unaware of this, thinking the phenomenon to be a mere headache.

Under Ludmoore's influence, Cedric imprisons Matt inside the magic book and has the Guardians seek out the magic stones needed to open the book. Once Ludmoore is released, Cedric believes that he will restore his powers. All throughout this time Cedric and Orube begin to form a relationship, as they both are extraterrestrials on Earth and could relate to each other. Eventually Cedric realizes that he is feeling the human emotion of love.

Once the stones are gathered, the book opens and sucks the Guardians, Orube, and Cedric inside. There Ludmoore restores Cedric's powers and has him face the Guardians and ransom the Heart of Kandrakar. Cedric goes along with this until Ludmoore's eye manifestation fires an energy beam at Orube, who tries to dissuade Will from giving in to the ransom demands. Cedric takes the blow instead and is wounded badly. At the entrance to the final chapter, the Guardians have no way of entering without ink. Knowing that creatures who die in the book world become ink, Cedric willingly lets himself die from the wound. As he does, he tells Orube that perhaps all this time his true goal was to find a place to belong. He then turns into ink, which is used to open the gateway to the final chapter.

In his "Cedric Hoffman" form, Cedric is an excellent hand to hand fighter. He also possesses the magical ability to transform into a large snake/man hybrid at will. During the numerous times he battles the Guardians, it is shown that he is capable of shooting energy blasts and raising magical barriers. Cedric is also able to "feel" Will's presence even when she was invisible. Cedric also demonstrates the ability to disrupt, erase and reveal the memories of others, like he did with Mr. Collins when he impersonated him. Cedric can also trap others in cold, hard impenetrable bubbles, like he did with the Guardians when they returned to Meridian to rescue Taranee. He can also take on the appearance of others, like he did with Mr. Collins.

In the comic book, Cedric can transform into his winged version that can enable him to fly. In the comic book, apparently Cedric can also make openings in the Veil, according to Elias Van Dahl, painter of The Last Tear, an enchanted painting Elyon traps the Guardians in, though if this was true, then the Veil erected by Kandrakar is rendered useless against the forces of evil, thus leading to a possible error and confusion. However, this could be corrected by saying that he isn't true evil, as he allowed himself to die in order for the Guardians and Orube to escape being trapped.

Cedric can also force disguised beings back into their original form, as he did with Elyon's parents. He was also the one who taught Elyon how to manipulate and wield her magical powers.

He also seems to have some sort of telekinetic power, as demonstrated in the TV series episode "Walk This Way". When he was trying to get off the Horn of Hypnos from Martin, he held out his hand and the Horn raised up towards him, thus making it seem like he has another power.

In the animated series, Cedric appeared to have super-strength when in fights with the Guardians, he is that strong, he can snap Cornelia's vines in one second. Cedric appeared to be immune of fire in "Happy Birthday Will" and "The Final Battle" in Season 1, as Taranee would send fireballs hurtle towards him and just punches them and sends them flying off course. However, her fireballs seemed to affect him in "Ghosts of Elyon" when she was protecting Cornelia from him. Cedric's main attack is normally using his tail as a whip. 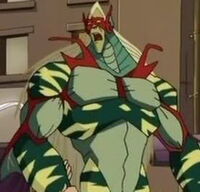 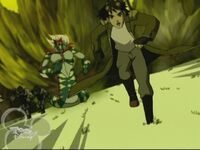 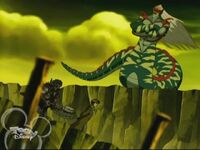 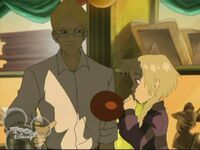 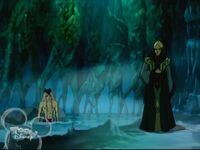 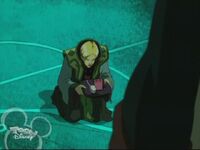 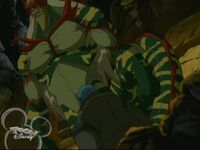 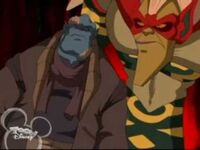 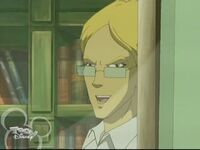 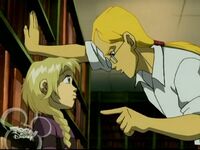 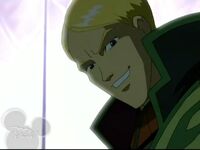 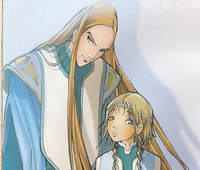 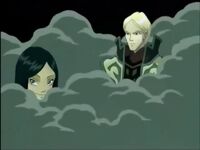 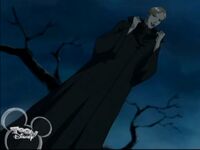 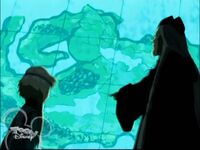 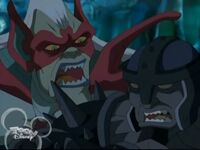 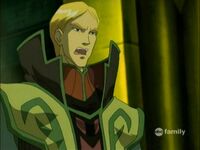 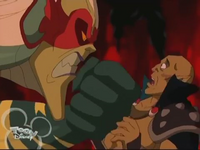