Mojo Jojo from The Powerpuff Girls
The Horned King

Dark Side of Sword of Synergy (formerly)

"The universe will soon be mine!"
"Seriously?!?"
"Get back here. Slow down. I just want to destroy you!!!"
"I AM NOT EMOTIONALLY UNSTABLE!"
"Banjo."
"I WISH YOU WOULD LEAVE ME ALONE FOR FIVE SECONDS-"
Lord Hater is the main antagonist of the Disney Channel/Disney XD animated series Wander Over Yonder. He is Wander's nemesis and ruler of the Hater Army. His main and number one henchman is Peepers, while his minions are known as Watchdogs.

Lord Hater is the most powerful and evil villain in the entire universe. He's also a whiny, insecure, selfish jerk.

Lord Hater is a power-hungry, evil, and cruel dictator. He hates being told what to do by those he declares lower than him, including his own henchman Peepers. What he desires most is an absolute rule of the entire universe under his fist, and no one stands in his way. However, he incredibly hates Wander, the physical opposite of everything that he is, and cannot stand him due to his superfluous optimism, obliviousness to his evil and one-sided friendliness. This antipathy not only infuriates him but also drives him over the edge to complete impulsiveness and attempts to obliterate Wander, even putting his plans aside just to do so. He can also be arrogant and is easily distracted when he believes he has the upper hand. But when worse comes to worse, Lord Hater is not to be taken lightly when he is fixated on a single-minded pursuit. When he realized his other nemesis Emperor Awesome was almost going to receive the chance of universal control before he could, this caused him to abandon Wander and easily took out the entire Fist Fighter army with one punch while rushing to Awesome and defeated him in under a second. Aside from this, he appears to have incredible power and nigh-invulnerability when he is pushed enough that put most opponents at a disadvantage.

Despite his reputation, however, Hater is exceedingly immature, prone to throwing temper tantrums and irrational thinking, acting more as a cranky teenager rather than an intergalactic conqueror. While he does have great abilities, Hater does not use the full extent of them unless it is to prove himself, often wasting his power for minimal purposes. It is also because of this that right after he accomplishes such feats it is his own ego and overconfidence that quickly causes him to lose in a situation with one like Wander, robbing him of intimidation and his dignity. Even most of his plans are somewhat frivolous or out of spontaneous desire, such as trying to prove his reputation whenever he is hinted to be "nice" or torturing others to use their screams for a song. He has also demonstrated naivete and an almost child-like nature, especially when learning of his nemesis' true identity that he fell into a captivated trance and developed an instant crush.

Hater is also shown to be very insecure and appears to desire popularity more than anything else. In "The Cool Guy" and "The Rager", Hater is shown to be quickly distracted by any chance to be seen as cool by others. Wander in particular seems to believe that Hater's cruel ways stem from his insecurity.

Lord Hater is a tall, skeletal being. His face is a skull with ragged looking shards for teeth, and his eyes are sunken in and have green sclera with black pupils. He wears a black and red cloak with a hood covering most of his head. Behind his head, two yellow horns in the shape of lightning bolts can be seen, similar to the Watchdogs. He has skeletal looking arms and wears long, yellow, raggedy gloves over his seemingly clawed, four-fingered hands. Underneath his cloak, he wears underwear and black shoes on his feet. 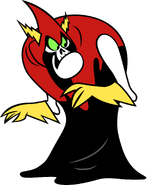 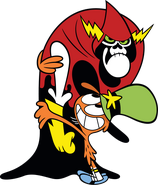 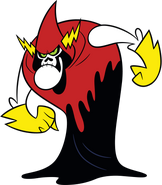 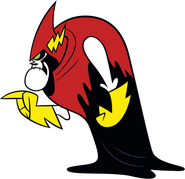 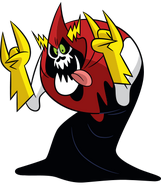 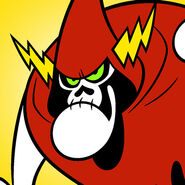 Hater madly in love with Dominator

First time doing something together with Wander and actually likes it.

Hater and Wander about to get killed by Dominator

Retrieved from "https://disney.fandom.com/wiki/Lord_Hater?oldid=4388472"
Community content is available under CC-BY-SA unless otherwise noted.