House of Mouse
Once Upon a Time

The Lost Boys from the play Peter Pan, or the Boy Who Wouldn't Grow Up by J.M. Barrie

As the name suggests, the Lost Boys were all male characters. However, this temporarily changed in Return to Never Land, where Wendy's daughter, Jane, becomes the first Lost Girl (although she later leaves the group).

Slightly is the second in command. He wears a fox costume and is shown to be the oldest member (and the tallest) of the Lost Boys. In the book series, he is called Slightly Soiled and it is revealed that his real name is James; his surname is never revealed.

Nibs is the most active and is the bravest of the group. He wears a rabbit costume and doesn't talk much. He may be the most minor Lost Boy, with the least amount of speaking parts (excluding Tootles of course). In the book series, it is revealed that his real name is Thomas. His surname is never revealed.

A set of twins that speak at the same time. Although they are known for this, they do not carry it out in the sequel; instead, they finish each other's sentences. They wear raccoon costumes. They are treated as one in the book because Peter has no clue who is who. In the books, their names are revealed to be Marmaduke and Binky, but it is not known which name belongs to who.

Cubby is the toughest of all the Lost Boys. He is large and overweight and speaks as if he does not have much knowledge. He wears a bear costume. In the book series, he is referred to as "Tubby Ted" which can be assumed that his real name is Theodore or Edward. His surname is never revealed.

Cubby is the most emotional of the boys. When Tinkerbell is first found to be ill in Return to Neverland, he bursts into tears and cries until Nibs shoves a club in his mouth.

Tootles is the only Lost Boy who does not speak at all; to compensate for this, he uses a large pad of paper to communicate (albeit only in Return to Neverland). He is the youngest of the Lost Boys and seems to be the most cunning of the group. He wears a skunk costume. In the book series, it is revealed that his real name is Pentiss, but his surname is never revealed.

In the first film, the Lost Boys made their first appearance when Peter took Wendy, John, and Michael Darling to Neverland. The jealous Tinker Bell told them a "Wendy-Bird" had started a flight across there and needed to be hunted down. This later led to conflicts between Peter, the Lost Boys, Wendy, John, and Michael. John and Michael want to join their wild brigade, and Peter appoints John as their temporary leader. They sing "Following the Leader" as they walk, but are soon captured by the Indians. While being carried to the Indian Camp, they are shown annoyed. There, John takes the blame for getting themselves captured and the Lost Boys accept his apology. The Chief explains that his tribe has fought the Lost Boys many times, and Cubby suggests that he should let them go. John is confused and Slightly explains that they turn each other lose after a side wins. The Chief says he will not be releasing them, and accuses them of kidnapping his daughter, Tiger Lily, but the Lost Boys tell him that they did not do so and had not seen her. The Chief threatens them to be burned at the stake if she did not return by sunset. However this punishment is prevented by Peter who rescues her from Captain Hook, the real kidnapper, and the Lost Boys, John and Michael are then set free. The Lost Boys also view Wendy as a mother-like figure, demanding she tells them stories. It eventually all came down to the final battle with Captain Hook, the children victorious in the end. The Lost Boys were sad to lose Wendy, but reluctantly allowed her, John, and Michael to return home under Peter's watchful eye.

In the sequel, Wendy has grown up and has a daughter of her own, Jane, a high-spirited girl who no longer believes in Wendy's stories of Neverland as her little brother, Danny does, due to war pressure. Her opinion is forced to change, however, when Captain Hook kidnaps her (thinking she's Wendy), she is rescued by Peter Pan and is taken to his hideout, Hangman's Tree. While the Lost Boys all excitedly crowd around her, Tootles reminds her of Danny and she runs off. Once she returns to Peter, it is then the Lost Boys' job to teach her how to have fun. They play a game of scavenger hunt, which ends with her being appointed their first Lost Girl. However, Tootles blows into the whistle that Captain Hook gave her, and this causes him and his crew to capture the Lost Boys and Peter. It all winds down to yet another final battle with him, the Lost Boys have finally unlocked Jane's inner child. Once she saves them and says that she must go home, they appear to be sad, as they begin to cry. However, she comforts them by saying that she will tell Danny their stories.

The Lost Boys make numerous background appearances in House of Mouse. In "Chip 'n' Dale", they are seen struggling to open a bag of peanuts until they are helped by Tinker Bell. In the episode "Donald Wants to Fly", they are part of a Neverland band and can be seen on stage singing along as Peter sings a version of "You Can Fly", although Nibs is not present during this cameo. After the song, they all fly back to Neverland with Peter and Tinker Bell.

The Lost Boys made cameo appearances at the end of "This is Your Life, Donald Duck".

In The Lion King 1½, the Lost Boys make a cameo appearance at the end, being called by Peter Pan to their theater seats, where they pile around him and shout.

In ABC's Once Upon a Time, the Lost Boys (also known as the "Lost Ones") are the murderous inhabitants of Neverland and servants of Peter Pan. He began forming them under his alias of the Pied Piper in the Enchanted Forest, in his quest to find the heart belonging to the "Truest Believer". Because time is frozen in Neverland, they do not age making them much older than their otherwise youthful outward appearance might suggest. As mentioned by Wendy, they cry at night because they miss their families. Captain Hook mentions to Emma Swan that while he was in Neverland, he spent time in the company of a group of orphans known as the Lost Boys.

The Lost Boys will appear in the live action remake and be featured as a more diverse cast of children that includes girls and boys. Slightly is now a child with Down syndrome, Nibs is biracial, the twins are African American girls, Cubby (reverted back to Curly) is a girl, and Tootles is African-American. Additionally two new Lost Boys were added. Birdie, who is a Chinese-American girl, and Bellweather, who is a Latino boy.[1]

The Lost Boys play supporting roles in the game, with the Twins often giving Peter the latest danger from Captain Hook, which leads to the latest mission, while the rest of the Lost Boys are locked in cages by Captain Hook, each of them hidden in a level of the game. It is worth mentioning that this is the only appearance of Tootles speaking. 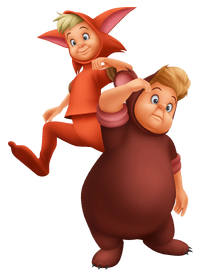 10 years before Sora ever landed upon Captain Hook's ship in Neverland on his search for his friends Riku and Kairi, Peter Pan and Tinker Bell lived there with his mischievous team of playmates, the Lost Boys. Together they spent their days in endless bliss. That is, until, Keyblade warriors, Terra, Aqua, and Ventus, each visited the world. The Lost Boys, including Peter Pan, were awestruck by the foreign heroes, having many conversations with them. They were seen on a treasure hunt with Aqua, as well as making her their "mother". They are also seen with Terra while he explores Neverland in allegiance with Captain Hook.

Only Cubby appears in this game during the Peter Pan's Flight mini-game. In the story, he is kidnapped by the pirates but fortunately, is rescued by Peter Pan and the player. Although he is the only Lost Boy to appear, Nibs' costume is available at the shops.

Animatronic versions of the Lost Boys are featured in the Peter Pan's Flight attraction.

The Lost Boys are extremely rare meet-and-greet characters there. They appear during Mickey's Halloween Party. Some of them also appear in the Festival of Fantasy Parade. They also appear in the animatronic form in Peter Pan's Flight. They appear twice through-out it. They first appear as small animatronics, sitting around a fire next to Hangman's Tree. Their second appearance of them is on the Jolly Roger, although only Cubby, Nibs, and Slightly are shown. These animatronics are much larger and tied to a mast, along with John and Michael.

Nibs has his own spell card known as "Nibs' Neverland Assault" in the attraction Sorcerers of the Magic Kingdom.

Young park guests play the role of the Lost Boys in the interactive show "Peter Pan to the Rescue".

The Disney Wiki has a collection of images and media related to Lost Boys.