The Lost Safari or Trapped safari is a group of characters from the Jungle Cruise. They were removed from Disneyland and the Magic Kingdom's Jungle Cruise in a 2021 refurbishment but remain in the Asian parks.

This was a safari which embarked on the African veldt at some point in the early 20th century. The safari was composed of a white colonial explorer leader, colonial peers of his, and four African guides. At some point, the safari was lost in the African veldt and chased up a tree by an angered black rhinoceros. By the mid-late 1930s they were still missing and considered to be the longest lost but most sighted lost expedition in human history.

The trapped safari was a gag scene designed by Marc Davis for a 1964 refurbishment of the Jungle Cruise. The original, Disneyland incarnation was considerably racist and featured inappropriate stereotypes of Africana peoples. The Magic Kingdom version on the other hand used foreign, colonial explorers instead. The latter of these incarnations was considered the more palatable, in-part due to having had anti-colonial interpretations.

In 2021, both versions were removed from the American parks and replaced with new characters Felix Pechman XIII, Rosa Soto Dominguez, Dr. Leonard Moss, Siobhan "Puffin" Murphy and Dr. Kon Chunosuke who were stranded by the Kwango Kate. These characters were each given inordinate amounts of backstory and made a central feature of the Jungle Cruise's narrative presented in the queue although they still only had the one appearance in the actual attraction. While the removed of the racist animatronics was generally well received, said refurbishment has still been criticized for using the aforementioned characters for a more romanticized depiction of 1930s colonialism.

In this restaurant there is a photograph of Disneyland's original lost safari. In-front of the safari in the Jungle Cruise boat The Zambezi Miss carrying the non-Disney characters of Charlie Allnut and Rose Sayer from The African Queen (1951), a film which inspired much of the Jungle Cruise.

The drink, "The Safari Sangria" might be named for the lost safari as in the flight-logs/drink-menus, Jock mentions having learned the drink while in Africa and having been taken by a skipper to see Schweitzer Falls.

The trapped safari used to appear in the American Jungle Cruises in the African veldt. They were replaced with Felix Pechman XIII and the stranded passengers of the Kwango Kate during a 2021 refurbishment.

The safari is still alluded to in Nigel Greenwater's Global Broadcasting Service loop, audio made to tie into the story of Indiana Jones Adventure: Temple of the Forbidden Eye and as a result is anachronistically set in 1936 (two years before the Jungle Cruise's actual setting). He mentions a skipper having spotted the lost safari on the African veldt and anecdotally brings up how they are the longest lost safari in history to be spotted as regularly as it is.

During this seasonal overlay, their tree/watchtower was made out to resemble a Christmas tree.

The menus have an illustration of the Magic Kingdom's lost-safari in them. The safari is indirectly alluded to by artwork in the architecture depicting the hyenas and black rhino.

These bars run by Trader Sam have a drink called "The Lost Safari" with a menu description referencing the expedition. In the Grog Grotto of Disney's Polynesian Village Resort, Sam has a photograph of the Disneyland safari.

Tales from Adventureland: The Golden Paw

An incarnation of the lost safari appears in this book and on its cover. 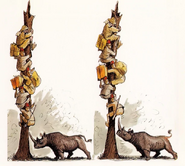