Active
Lost Souls are characters in Disney•Pixar's 2020 animated feature film, Soul. They appear when 22 and Joe Gardner lands on The Astral Plane.

Lost Souls wander in The Astral Plane while their Earthly selves struggle to break free of obsession. “Some people get caught up in something that isn't necessarily bad—cooking, video games, art,” says director Pete Docter. “But if you do it to the exclusion of everything else in life, you might become a lost soul.”

When Joe and 22 arrived in the Astral Plane, Joe soon witnessed several lost souls, one in particular moving about and continuously saying "make a trade". Joe ends up alerting the lost soul to his and 22's presence and it chases after them. However, they were saved by Moonwind and his crew who restrain the lost soul with a net. Moonwind's crew make some music so as to free the lost soul from its trance and its body dissolves to reveal the soul of a hedge fund manager. Once the soul was free, Moonwind helped the soul return to his body where he happily destroyed his computer and tried to get his co-workers to do the same.

Joe and 22 board Windmoon's ship along with him and his crew, and on the way to a thin spot in the Astral Plane, Joe takes notice of even more lost souls, noting how there are so many of them. Moonwind gives some insight on the lost souls and then a soul, determined to find something with a metal detector, is witnessed becoming a lost soul. Moonwind then mentions how he for a time was a lost soul, apparently once having an obsession with the game Tetris. 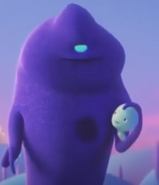