Isabella Patricia Phillips
Indigo Sanara Phillips
Lili Jordan Phillips
Grace Moorea Phillips
Louis Diamond "Lou" Phillips is a Filipino-born American actor and director. His breakthrough came in 1987 when he starred as Ritchie Valens in the biographical drama film La Bamba. Phillips was nominated for a Golden Globe Award and won an Independent Spirit Award for his portrayal of Angel David Guzman in the inner-city high school drama Stand and Deliver. He made his Broadway debut with the 1996 revival of The King and I, earning a Tony Award nomination for his portrayal of King Mongkut of Siam.

For Disney, he voices Victor Delgado in Elena of Avalor and Surak in The Lion Guard. He also directed an episode of Agents of S.H.I.E.L.D.. 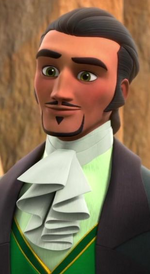 Surak
(The Lion Guard)
Add a photo to this gallery

Lou Diamond Phillips speaks onstage at the Longmire panel at the 2015 Summer TCA Tour.
Add a photo to this gallery
Retrieved from "https://disney.fandom.com/wiki/Lou_Diamond_Phillips?oldid=4199059"
Community content is available under CC-BY-SA unless otherwise noted.