Shanna, Louis Jr., and Brent
Louis Jude "Lou" Ferrigno is an American retired professional bodybuilder and actor, who is best known for his role as the Marvel character the Hulk in the CBS television series The Incredible Hulk from 1977 to 1982, and its television films from 1988 to 1990. He also did the voice of the Hulk in television shows and films, including the Disney/Marvel superhero 2012 film, The Avengers. He was uncredited for his voice role. He reprised his role in Avengers: Age of Ultron. He even appeared as himself in the Sonny with a Chance episode "My Two Chads". 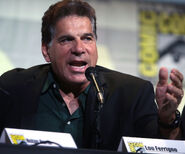 Lou Ferrigno attending the 22nd annual Hollywood Film Awards in November 2018.
Add a photo to this gallery
Retrieved from "https://disney.fandom.com/wiki/Lou_Ferrigno?oldid=4311055"
Community content is available under CC-BY-SA unless otherwise noted.