Bayou of New Orleans
Louis' Trumpet is the prized instrument owned by Louis the Alligator in the film The Princess and the Frog. With his trumpet always by his side, Louis has learned the art of jazz, eventually becoming the greatest trumpet player in New Orleans. This was exploited when he became the star attraction of the Tiana's Palace restaurant. 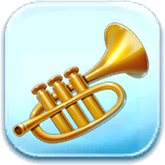 Louis plays with the big boys with Giselle.

This object article is a stub. You can help Disney Wiki by expanding it.