A recently blinded man becomes one of the first American users of a seeing eye dog and must fight to remove the legal barriers impeding its use. 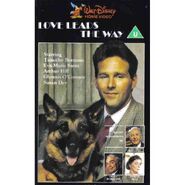