1935-2007
Lucille Theresa Bliss was an American actress and voice artist, who is best known for voicing the title character of Crusader Rabbit (the first animated series made for TV), Miss Bitters in the Nickelodeon series Invader Zim, and Smurfette in The Smurfs.

Bliss' other credits include The Flintstones, Ewoks, Avatar: the Last Airbender, and animated films, like The Secret of NIMH and Robots.

For Disney, she voiced Anastasia Tremaine in the 1950 film Cinderella, the Sunflower and Tulip in Alice in Wonderland, and a mermaid in Peter Pan. She was also the TV commercial singer for the Kanine Krunchies in One Hundred and One Dalmatians and voiced Rozatta the Toydarian in the 2002 video game Star Wars: Bounty Hunter. 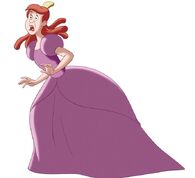 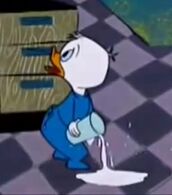 Donald's son
(How to Have an Accident at Work)

Lucille Bliss in her youth
Community content is available under CC-BY-SA unless otherwise noted.
Advertisement