Scientist
Matriarch of the Robinson family

Dr. Lucille Krunklehorn-Robinson is a supporting character in the 2007 film Meet the Robinsons.

She is shown to be very caring to her family and celebrates the future's motto of "keep moving forward".﻿

Even at a young age, Lucille Krunklehorn was interested in science and adventure. Many of her favorite memories include her very first science fair, the day she got her first microscope, swimming the English Channel, and receiving a gold medal for the luge. But her favorite of all is her wedding day to a man named Bud Robinson, a science teacher who shared her quirky nature by wearing his clothes backwards.

In 2007, Lucille, now a doctor at Inventco Labs, supervises Joyce Williams Elementary School's Science Fair along with a teacher named Mr. Willerstein. Mr. Willerstein thanks her for participating, to which Lucille rapidly tells him it's a pleasure, that maybe one of his students the next integrated circuit, complimenting his bowtie, and screaming that she hasn't slept in eight days. Mr. Willerstein awkwardly asks if she would like a cot, but Lucille says no, explaining she has the caffeine patch. Slapping one on Mr. Willerstein's head, she lifts up her sleeve to reveal a set of patches on her arm. She then goes on to explain that her invention is the equivalent to 12 cups of coffee with no side effects, before screaming out of nowhere and quickly apologizing. The two then walk up to a student named Stanley Pukowski, a chubby kid with a diorama of Mount Vesuvius. She coddles at how cute he is and wants to squeeze his "chubby little cheeks". Suddenly, the school's Coach arrives, blowing his whistle, causing Dr. Krunklehorn and Mr. Willerstein to scream and hold on to one another. When Stanley's volcano fails to set off, Mr. Willerstein notices Dr. Krunklehorn asleep. He calls out her name, causing her to jolt up and yell, "BARIUM, COBALT, EINSTEIN, KOOL-AID!" She watches excitedly as Lewis proceeds to demonstrate his Memory Scanner and watches as it spectacularly fails. Afterwards, she helps clean up the mess and when Lewis returns begging for another chance, she decides to let him try as her ride hasn't arrived yet. Lewis uses her as his test subject instead of himself as originally and after deciding on which of her accomplishments she wants to relive (among which is  first science fair, first microscope, swimming the English Channel, first gold medal for the luge), she whispers a specific date (15 years/6 months/17 days) to Lewis and he successfully brings the memory up on the Scanner, (6/17/1992) the day of her wedding to Bud Robinson. The machine works perfectly and Lewis wins the Science Fair while realizing who she is when her father calls her "Lucille" in the memory and her husband is clearly Bud. Bud shows up and is impressed by Lewis as well and Lucile and Bud later adopt Lewis, buying Anderson Observatory to be their new home.

In the future, she is seen "baking cookies" when Bud opens the door to show her dancing to Swing music. When Lewis starts to ask her questions before returning to his own time, she simply tells him to go back to the Science Fair and she'll see him "real soon", presumably referring to her role as the Science Fair Judge. 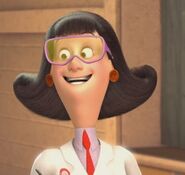 Unknowingly, Lewis and his soon-to-be family appear in their first portrait together

Lucille on her wedding day
Add a photo to this gallery

Retrieved from "https://disney.fandom.com/wiki/Lucille_Krunklehorn?oldid=4475788"
Community content is available under CC-BY-SA unless otherwise noted.