Lucille first appeared in episode "Hook Seals a Deal!". She steals the beach toys from Jake's crew and even Captain Hook's rubber ducky, forcing Hook and Jake's crew to join forces in order to get their toys back. Later on she returns them, after she and Jake stop Hook from swiping all the toys. She becomes friends with Jake and his crew.

Lucille reappears in the episode "Treasure of the Tides" swimming in Mermaid Lagoon with Izzy, Marina, and Stormy. Before they set off to find the "Treasure of the Tides", Hook orders Sharky and Bones to block the lagoon using The Jolly Roger. But the two pirates were no match for the slippery seal, who was able slip past them and recruit the help of two blue whales to force the Jolly Roger out of the way so Izzy and the mermaids could catch up to Hook and Mr. Smee.

Lucille makes a brief cameo appearance in the episode "The Mermaid Queen's Voice",she can be seen after Captain Hook and Queen Coralie duet clapping amongst Jake, Izzy, Cubby, and the rest of their Never Land friends.

"It's a Winter Never Land!" 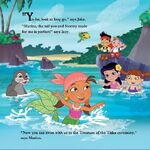