Lucky Duck is a Disney Junior original special, that premiered on June 20, 2014. It was created for Disney Junior by Corus Entertainment's Nelvana.

Lucky, a small rubber duck (voiced by Christian Borle), prepares to leave the toy factory where he was born to be shipped to the store when, because of Code S (a faulty whistle), it is immediately trashed. By dint of pugnacity, he still manages to return to a box of toys ready to board a boat. New twist of fate: Lucky inadvertently pass overboard! Then he will have to face all the dangers always pursuing the same goal: to find the perfect home.

The movie has only seen a DVD release in Australia, where it was released by Jigsaw Entertainment, under license to Disney. 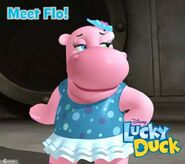