Steal a chip from the Mighty Ducks

Sent into Dimensional Limbo by Dragaunus.
Lucretia DeCoy is a character and minor antagonist in Mighty Ducks.

Lucretia is a traitor to the race of the Ducks and a spy for the Saurians. Tanya is the only one who knows who she was, but she prevents her from revealing that she is a spy by tying her to the top rafters of the Pond. When she entered, both Nosedive and Duke fell head over heels for her, and they both made fools of themselves to impress her. She tells the others that her name is "Vonda McDrake". She is thrown into Dimensional Limbo by Dragaunus, who believes that she switched the item she was sent to steal from a tomb with the help from the Ducks; however, it had really been switched by Wildwing. The end result is her being sent into Dimensional Limbo, and the weapon Dragaunus tries to use the chip for blowing up in his face. 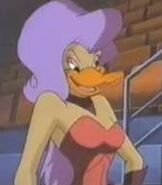 Lucretia DeCoy's defeat
Add a photo to this gallery

Retrieved from "https://disney.fandom.com/wiki/Lucretia_DeCoy?oldid=3985408"
Community content is available under CC-BY-SA unless otherwise noted.