2005-present
Lucy Chet DeVito is an American actress known for her role as Anne Greenstein in the 2009 comedy, Leaves of Grass. She is the eldest daughter of actor, comedian, and filmmaker, Danny DeVito and Rhea Perlman and older sister of Grace and Jake DeVito. She has made a couple cameos in a few of her father's movies such as Noble Son.

For Disney, she played Stephanie Krause in the ABC Family sitcom, Melissa and Joey, and a coat check receptionist in the 2019 remake of Dumbo. 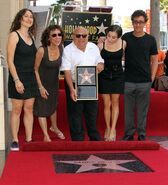 Lucy DeVito with her siblings, Grace (second from right) and Jake (far right) and her mother, Rhea Perlman attending their father's Hollywood Walk of Fame ceremony in August 2011.

Lucy DeVito attending the 2016 Tribeca Film Fest.
Add a photo to this gallery
Retrieved from "https://disney.fandom.com/wiki/Lucy_DeVito?oldid=3998630"
Community content is available under CC-BY-SA unless otherwise noted.