2003-present
Karen Lucille "Lucy" Hale is an American actress, voice actress, and singer. She is best known for her role as Aria Montgomery on the ABC Family/Freeform teen drama mystery-thriller series Pretty Little Liars from 2010 to 2017.

For Disney, she voiced Periwinkle in the 2012 Disney Fairies film, Secret of the Wings and played Justin Russo's girlfriend Miranda in an episode of the Disney Channel original series Wizards of Waverly Place. She also sang Demi Lovato's version of "Let It Go" in a duet with Rascal Flatts for We Love Disney. She even guest starred in the Freeform sitcom Baby Daddy. 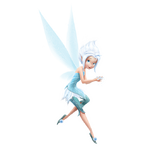 Periwinkle
(Secret of the Wings)
Add a photo to this gallery

Lucy Hale taking a stroll in Los Angeles in November 2018.

Lucy Hale speaks at the Katy Keene panel at the 2019 Summer TCA Tour.

Lucy Hale attending the 25th annual Critics' Choice Awards in January 2020.
Add a photo to this gallery
Retrieved from "https://disney.fandom.com/wiki/Lucy_Hale?oldid=3901539"
Community content is available under CC-BY-SA unless otherwise noted.