In 1948, two best friends named Guido and Luigi moved into Radiator Springs, and had the most amazing time of their lives. After they were done in Radiator Springs, they decided they never wanted to leave. So they stayed, and opened Luigi's Casa Della Tires on April 5. 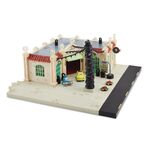