Still standing
Luigi's Casa Della Tires is a tire shop in Radiator Springs owned by Luigi in Cars and Cars 2.

In 1948, two best friends named Guido and Luigi moved into Radiator Springs, and had the most amazing time of their lives. After they were done in Radiator Springs, they decided they never wanted to leave. So they stayed, and opened Luigi's Casa Della Tires on April 5th. 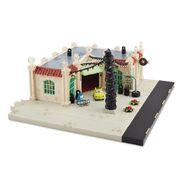 Luigi's Casa Della Tires Playset
Add a photo to this gallery
Retrieved from "https://disney.fandom.com/wiki/Luigi%27s_Casa_Della_Tires?oldid=3713495"
Community content is available under CC-BY-SA unless otherwise noted.