Complications from a stroke

He became a teen idol for playing Dylan McKay on the TV series Beverly Hills, 90210 from 1990 to 1995, and again from 1998 to 2000. From 2001 to 2002, he starred in the HBO prison drama Oz, as the Reverend Jeremiah Cloutier. From 2002 to 2004, he starred in the post-apocalyptic television series Jeremiah. In 2006, Perry co-starred in the ensemble drama series Windfall. Perry appeared on Broadway in 2001, in a revival of The Rocky Horror Show, playing Brad Majors. In 2004, he appeared in the London production of When Harry Met Sally as Harry, alongside Alyson Hannigan as Sally. From 2017 until his death, Perry starred as Frederick "Fred" Andrews, Archie's father and owner of Andrews Construction, on the CW series Riverdale.

For Disney, he voiced Stewart Waldinger in Pepper Ann. 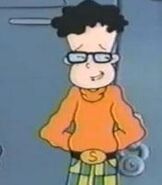 Stewart Waldinger
(Pepper Ann; in tandem with Cam Clarke)
Add a photo to this gallery

Perry with Roger Rabbit on the cover to Disney Adventures (September 1992). 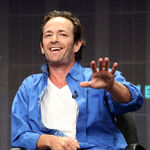 Luke Perry speaks at the Welcome Home panel at the 2015 Summer TCA Tour.

Luke Perry speaks at the 2018 San Diego Comic Con.
Add a photo to this gallery
Retrieved from "https://disney.fandom.com/wiki/Luke_Perry?oldid=3818963"
Community content is available under CC-BY-SA unless otherwise noted.