Mrs. Kipling
Luke Ross is one of the main characters of Jessie. He is shown to be a very mischievous boy. He was adopted from Detroit, Michigan when he was 4 years old. He is the second eldest child in the Ross family. He loves breakdancing and video games along with Ravi. He also thinks and considers himself as a "chick magnet" and a "ladies' man."

Luke Ross is a 15-year-old boy who was adopted by Morgan and Christina Ross at the age of 5 from Detroit, Michigan. He has developed a crush on Jessie since the moment he first saw her. He first called Jessie "babe" and also asked his mom's permission for him to date her which actually resulted in a no. Despite, Christina saying no to Luke, he continually tries to get Jessie's attention by asking her out on a date. He loves flirting with girls, mostly Jessie. He also loves playing video games and breakdancing. He also is smarter than his sister Emma, but less than the rest of his brothers and enjoys pranking his brother, Ravi. Luke is known to be a devious, flirty, sarcastic, air-headed and laid-back guy.

In "New York, New Nanny", he meets Jessie and instantly develops a crush on her. He tries many ways to impress her, including voting yes when she is considered to be the new nanny, dressing up in a tux, giving her roses, having a dinner made for them, and asking her on a date. To get Jessie's attention, he and his three siblings run away in their parents' helicopter. He also attends Emma's science fair with Jessie.

In "The Talented Mr. Kipling", he is assigned as partners with Emma for a school assignment for their photography class. In "Used Karma", he starts pulling pranks on Ravi. Annoyed by this, Ravi gets back at him. Luke learns his lesson when Ravi gets back at him by pulling pranks on him and convincing him they happened because of his bad karma. In "Zombie Tea Party 5", he teams up with Jessie to beat his rival at a paintball game.

In "One Day Wonders", he performs in the park with Jessie. He dances while Jessie plays guitar and sings a song that she wrote.

In "Zuri's New Old Friend", he helps Ravi and Emma borrow a toy dinosaur from the park because they think Mr. Kipling is in love with it.

In "Creepy Connie Comes a Callin", he gets a new math tutor, Connie, who was hired by Jessie. Jessie thinks Connie will be the perfect example to Luke until she finds out that Connie has an obsessive crush on him.

In "A Christmas Story", he helps Jessie and the Ross kids decorate their penthouse for Christmas and tries to get Jessie to kiss him under the mistletoe. He later goes to the mall and temporarily ends up in toy jail with Jessie and Emma because of an angry elf. At the end of the episode, he kisses Jessie on the cheek in surprise, just after she wakes up and before the family takes a picture.

In "Star Wars", he looks through Jordan Taylor's suitcase with Zuri and they find his cell phone and start prank-calling celebrities from his contact list.

In "Are You Cooler Than a 5th Grader?", he helps Ravi through his first day at Luke and Emma's school. Ravi ends up embarrassing Luke in front of his friends. Luke tells Ravi they aren't brothers anymore and to pretend he doesn't know him while they're at school. Luke ends up forgiving Ravi after he defeats the school bully by giving him a sandwich filled with hot Indian peppers.

In "Take the A-Train... I Think?", he helps Bertram get rid of a pesky spider that has made its home in the Ross household.

In "Romancing the Crone", he tries to make Mr. Kipling an internet star, along with Emma and Ravi.

In "The Princess and the Pea Brain", he tries to convince Brody to give him a ride on his motorcycle. He also appears in Zuri's fairytale story as Brody aka Prince Smarming's assistant.

In "World Wide Web of Lies", he learns how to wrestle from Bertram, along with Ravi.

In "The Kid Whisperer", he is getting in trouble lately, so Jessie disciplines him - but she ends up treating him like a dog.

Luke has an extremely big crush on Jessie. Throughout the show, he constantly tries to hit on Jessie, as many times as possible. Due to being an air-head he usually misunderstands the idea that Bertram and Jessie are either acting or pretending to be a couple. He even gets creepy when it's revealed by Luke that he saved a DVD video of Jessie hanging out at the beach and that he placed a camera in Jessie's room to spy on her, however, Jessie found out about it and placed a note saying that he's a pig.

Emma is Luke's older sister that fights with him a lot, even though they fight, they still have some fun adventures together. She usually doesn't enjoy hanging out with Luke, because of his repulsive and air-headed personality.

Ravi is Luke's younger brother adopted from India and his best friend. Luke enjoys pulling pranks on Ravi, but they do share a good brotherly/friendly relationship. But, usually either manipulates him throughout his intelligence or constantly insults him about him not being able to get girls, being a nerd, never winning anything, or being nonathletic.

Zuri is Luke's younger sister adopted from Africa. They appear to have a good brother-sister relationship, as they both enjoy pulling pranks or making schemes. 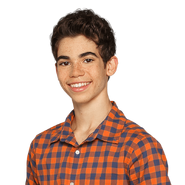 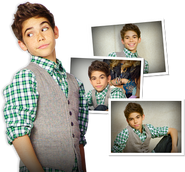