Star Wars: The Book of Boba Fett (in construction)

Luke Skywalker's Jedi Temple is an unnamed Jedi Temple located on an unidentified verdant planet, sometime after the end of the Galactic Civil War. Luke used this Jedi Temple to train a new generation of Jedi Knights, in order to restore the Jedi Order to its former glory. Unfortunately, during the night Ben Solo fell to the dark side, the Jedi Temple was destroyed by a lightning storm which kills all the students that were inside it.

Sometime after the Battle of Jakku, Jedi Master Luke Skywalker discovered or built this Jedi Temple on an unidentified verdant planet to serve as a Jedi academy and train a new generation of Jedi Knights. Among Luke's students was his nephew, Ben Solo, and various other Force-users.

Luke's Jedi Temple was eventually destroyed, in the same night Ben Solo turned to the dark side. Different versions of the night of the destruction exist.

In the comic book The Rise of Kylo Ren, the event is depicted for the first and only time in a first person point of view, instead of being told from an outside perspective. In the comic, the Temple is destroyed by a lightning storm and Ben Solo is a witness of the event. Right after, he runs away from the three students who survived when they arrive at the location. He does not take anyone with him upon leaving, and these three survivors all die during the following events without turning to the dark side, thus disproving several other versions of the event, including Luke's. The origin of the lightning storm that destroyed Luke's Jedi Temple is not clear in the comics.

After the version of the comics, other Star Wars material continued to claim that Ben Solo was the responsible for the event. However, the Star Wars databank still claims that Ben not only killed the students but also left with several of Luke's apprentices,[1][2] similar as Luke had stated in The Last Jedi, thus showing that there are continuity errors in the canon sources of the story. Most of these sources also seem to be disconnected from what happens in the comics as details of the event, such as the lightning storm, and details about the three students who survived, such as who they were and their fates, are not mentioned in them. Only one Star Wars booklet called Kylo Ren and Other Dark Side Followers mentions the event specifying that Ben destroyed the Temple by creating a thunderstorm.

In the recent Star Wars book called Skywalker: A Family at War, the lightning storm and the events of the comic are finally addressed in greater detail. The book simply states that the meteorological reports support that the cause of the Temple's destruction was a freak dry-lightning storm as seen in the comic. Then, the book goes even further to explain about the three students that survived, stating that none of them were killed by Ben's lightsaber blade. According to the book, the last and only student that was shown to be intentionally killed by Ben in the comic, was in reality murdered by Kylo Ren, as Ben Solo had already fully given himself to the dark side at that point and was not a Jedi anymore. The book links Ben's turn to the death of this last student and never mentions him as the one responsible for the Temple's destruction.

Luke's Jedi Temple appears during Rey's vision when she touches the Skywalker lightsaber. In her vision, it is shown the aftermath of the Temple's destruction, as Luke Skywalker and R2-D2 are seen watching it burn.

In the film, the events of the night that the Temple was destroyed are first mentioned by Luke while he is teaching the second Jedi lesson to Rey. Luke explains that he sensed the dark side within Ben during the Jedi training and one night he went to confront his nephew. Then, according to Luke, Ben not only attacked him by collapsing the hut, but also destroyed the Jedi Temple, slaughtered half of the students and took the other half with him upon leaving the burning Temple (Unbeknownst to everyone, including Luke, Ben did not actually massacre or took any of fellow apprentices with him).

After coming out from under the rubble of the hut and finding his Temple on fire, Luke was in horror for being unable to stop the death of his apprentices, as he and his astromech droid R2-D2 watched the Jedi Temple burning. Luke went in search of the First Jedi Temple, as he was guilt ridden over his students' deaths and Ben's fall to the dark side. Luke decided that he would remain in hiding on Ahch-To until the time of his death, so that the Jedi would end with him.

Later, when Rey is talking to Kylo Ren during one of their Force connections, Kylo explains that Luke did not told the whole truth about the night he destroyed the Jedi Temple and fell to the dark side. He claims that his uncle sensed his power and wanted to kill him in his sleep because of it. Ben Solo is seen waking up to find his uncle with an ignited lightsaber prepared to strike him, so Ben attacks Luke in self-defense upon collapsing the hut around them. Afterwards, Rey confronts Luke about the truth of the event and Luke confesses that he was in fact tempted to kill his own nephew because he was afraid of how strong his nephew's connection to the dark side of the Force is.

The events of the night Ben Solo fell to the dark side are retold from Ben's perspective in this comic. Upon coming out from under the rubble of the hut after defending himself from Luke, Ben Solo feels betrayed, enraged and confused, but is then surprised when he witnesses clouds that suddenly appear in the sky before a violent lightning storm strikes the Jedi Temple, setting it on fire and killing all the students inside. Horrified, Ben runs towards the temple to try to save his friends, but he is drawn away by a blast of the exploding Jedi Temple. As Ben mourns and blames himself for the death of his fellow apprentices, by stating that he never wanted this to happen, a voice in his head (either Palpatine or Snoke) communicates with him through the Force and tries to comfort him by saying that it is the Jedi's and Skywalker's fault, not Ben's.

Three of the students survived this event because they were off planet when the storm happened. The three apprentices arrive and become shocked upon seeing the Temple burning, so they leave their spaceship and ask Ben what happened and where is their Jedi Master. Ben tells them that Luke tried to kill him in his sleep and that now he is dead. One of the students, a girl named Voe, does not believe Ben, stating that Luke would never hurt them and that Ben would not be strong enough to kill him. Another student named Tai, who is close friends with Ben, does not believe Ben is acting as himself and states that Ben would never do any of the things he is claiming he did. As Ben attempts to leave the location, the three students try to stop him, demanding more answers. Voe along with the third student named Hennix, soon ignite their lightsabers to fight Ben. When they try to attack him, Ben uses the Force to push the three apprentices away from him and then leaves aboard his spaceship.

After leaving the destroyed Temple, Ben Solo continues to assume the blame for the entire incident for himself. He later claims to Snoke that he killed his uncle and upon meeting the Knights of Ren, he explains to their leader, "Ren", that he destroyed the Jedi Temple. Snoke quickly corrects Ben about the first claim by stating that the Jedi Master would not have died that easily.

During the following events, the three students who survived continue to pursue Ben Solo for attacking their master Luke. Hennix is later accidentally killed by his own lightsaber while confronting Ben, Tai is murdered by "Ren", and the last one, Voe, is killed by Kylo Ren, the new persona of Ben Solo as a warrior of the dark side.

Skywalker: A Family at War

This book addresses the lightning storm and the events seen in the comics, stating that meteorological reports support that the cause of the Temple's destruction was a freak dry-lightning storm, Ben Solo is never mentioned as the one responsible for the event. The book also explains about the three students that survived the destruction, linking Ben Solo's transformation to Kylo Ren with Voe's death, as he had already fully given himself to the dark side at that point. The book also mentions how none of the students were killed by Ben's lightsaber blade, as Hennix was killed by his own saber, Tai was killed by "Ren", and Voe was killed by Kylo Ren while he was wielding "Ren"'s lightsaber (in addition to not being Ben Solo anymore).

Luke Skywalker's Jedi Temple, prior to the "Jedi massacre".

Luke Skywalker's Jedi Temple in the aftermath of the "Jedi massacre". 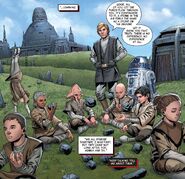 Luke's Jedi Temple in The Rise of Kylo Ren comic.

Luke's Jedi Temple being destroyed by a lightning storm. 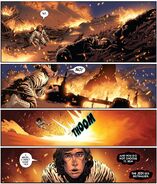 Ben runs towards the burning Temple.