Disney Wiki
Register
Don't have an account?
Sign In
Advertisement
in: People, Actors, Around the World in 80 Days,
and 9 more

1996-present
Luke Cunningham Wilson is an American actor and comedian, known for his roles in films, such as Idiocracy, Old School, Bottle Rocket, The Family Stone, and Death at a Funeral. He has also voiced Jim Stanton in Battle for Terra and Bodi in Rock Dog.

He is the youngest brother of actors Andrew Wilson and Owen Wilson.

For Disney, he played (alongside Owen) the role of Orville Wright in Disney's 2004 movie, Around the World in 80 Days and Dr. Peter Flynn in Rushmore.

Orville Wright
(Around the World in 80 Days)

Luke Wilson with his brothers, Andrew and Owen in June 2008.

Luke Wilson speaks at the Enlightened panel at the HBO portion of the 2011 Summer TCA Tour.

Luke Wilson speaks at the Roadies panel at the Showtime portion of the 2016 Winter TCA Tour. 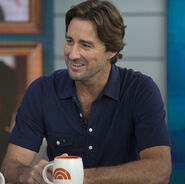