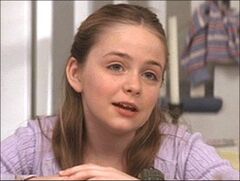 Lulu Plummer is one of Julie Plummer's children of the 2005 action comedy film, The Pacifier. She is the middle child of the Plummer family and is the most troublesome of the five. She also belongs to a troop called "Fireflies", who are bullied by another troop called the Bear troop but in the end they beat the Bear troop boys up for being so mean to the girls.

Lulu is kind of mischievous to Shane Wolfe, and asks him lots of questions. One night, when she follows him down the hall, she asks him "why his boobs are so big", but he tells her that they are not boobs.

When Lulu walks into the playroom with Shane, she asks him if her boobs will get as big as his someday. However, he replies with "I think it's time you went nappy-poo in beddy-bye land". His words greatly embarrass Lulu.

With that Lulu storms off to her room, declaring, "Disrespectful. And I think I was interested in you!"

Lulu is first seen peeking round the door and screaming when she sees Shane, and closes the door. She hides behind the stair banister, afraid of him at first. On the night after Julie leaves, she screams and he follows the sound, but he sees her playing a video game. She is woken by him whistle between Zoe and Seth. At the table, she copies what Wolfe says, then says, "Peter farted."

Later in the film, Lulu reappears in the living room, complaining with her siblings that they have something to do tomorrow. The next day, she crosses her eyes to show Shane, but it upsets Tyler. With Shane on the phone, she shushes him. She is seen again with her siblings in the garage staring at their minivan. She is buckled in her seat between Peter and Tyler, but when she's chased by Mr. Chun later in the film, she is seen sitting in the front beside a desperate Zoe.

Retrieved from "https://disney.fandom.com/wiki/Lulu_Plummer?oldid=4123192"
Community content is available under CC-BY-SA unless otherwise noted.