My Friends Tigger and Pooh

Getting into trouble, scary stuff, being trapped
Lumpy is a Heffalump and a character from the Winnie the Pooh franchise.

Due to Lumpy's playful attitude, Pooh and his pals learn that heffalumps are not predators; heffalumps are prey and they are herbivores. Lumpy likes honey, can be afraid at times, and loves to bounce. He can (almost) never remember his full name, Heffridge Trumpler Brompet Heffalump, IV, hence he normally goes by "Lumpy."

Lumpy has pinky-purple skin. He has five pink-purple hair tufts on his head. He has four legs with two small purple nails on each. He has a pink/purple puffy tail on his back. His ears are big with the inside part pink. He has two small black eyes. Finally, he has a small proboscis with a large nostril at the end of it.

Roo joins the heffalump-hunting expedition without his mom's knowledge, and ended up discovering Lumpy and captured him. Roo soon discovered that none of the scary things Pooh and the others had told him about heffalumps were true. The two became fast friends and were seen celebrating their friendship in the song "Shoulder to Shoulder," in which Lumpy finally "uncaptured" himself.

When Lumpy and Roo went to meet the gang, everyone (except Kanga) thought he was a dangerous monster (despite being clearly harmless) and trapped him in a cage. When the gang leaves, Roo goes back and frees Lumpy. Pooh and the others then capture Lumpy again and trap him in a net. Lumpy starts crying, but Pooh and his friends don't care, their prejudice against Lumpy blinds them from his feelings. Roo starts to tell them that Lumpy's not dangerous after all and the gang realizes what they have done. Pooh, Rabbit, Tigger, and Piglet free Lumpy and apologize for everything.

Just then, Roo is trapped under some wood. Lumpy calls for his mother and with her help, the gang frees Roo. Lumpy and Roo decide to continue playing for the rest of the day.

Lumpy joins Roo, Tigger, Piglet, Rabbit, Pooh, and Eeyore during Halloween. But when Pooh eats all the candy, Roo and Lumpy go look for a monster Tigger talked about. "'Cause if they catch him, it will grant them a wish!" Lumpy gets trapped in a tree and Roo later finds a pumpkin in the woods. The gang thinks Lumpy turned into a pumpkin. But when Roo wishes Lumpy back, Lumpy gets out of the trap. And it appears that Kanga lost her own Lumpy-looking pumpkin earlier.

My Friends Tigger and Pooh

Lumpy became a semi-regular character in My Friends Tigger & Pooh. Lumpy has a stuffed alligator named Alvin. He is fond of the snack rumpadoodles.

Lumpy appears along with Pooh and his friends for the first time in the Kingdom Hearts franchise in Kingdom Hearts III in the world of Hundred Acre Wood. 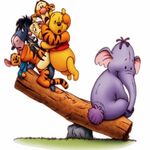 Lumpy with his Mother 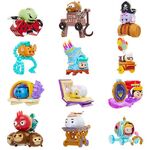 Clip art of Lumpy
Add a photo to this gallery

Retrieved from "https://disney.fandom.com/wiki/Lumpy?oldid=4173169"
Community content is available under CC-BY-SA unless otherwise noted.